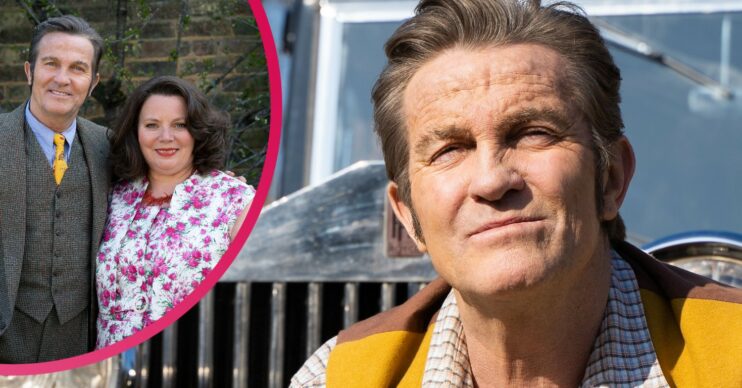 The Larkins: Bradley Walsh reveals he was crushed by a pig during filming

And that's not the only thing that disagreed with him on set!

Bradley Walsh plays Pa Larkin in the upcoming ITV1 family drama The Larkins – but filming had its downsides he’s revealed.

The actor and TV presenter, 61, told ED! that he was nearly crushed by the farm yard animals.

Bradley Walsh got too close for comfort with a farmyard animal during filming of The Larkins.

The series, which starts next month, is filmed on a real working farm in Kent.

But one scene saw Bradley sharing a pen with a pig!

Talking to journalists at a press launch for The Larkins, Bradley said: “It’s a proper working farm [in Kent].

He added: “And I nearly got crushed by a pig by the way, thanks to director Andy De Emmony.

“He made me get in the pig pen with Betty the pig.”

Bradley Walsh on the farm as Pa Larkin

Bradley also revealed that the frisky pig wasn’t the only thing that disagreed with him on set.

He laughed: “It’s a brilliant atmosphere on set.

“But for someone who gets hayfever, though, it’s a bit tricky.

“I’ve got to be honest, I’m taking three or four Loratadine [anti-hayfever tablets] to get through the day.

Of course, Bradley is rarely serious and is laughing throughout the interview – conveying just how much fun he really had on set.

The Larkins on ITV1 – what else do we know?

She said: “He used to spit out his bridle.”

She also admitted there was lots of “farting and burping” on set – although she was too polite to name the culprits!

It’s a far cry from her role as Siena Rosso in Bridgerton!

Bradley Walsh was keen to stress he loved working on the set of The Larkins, and that agreeing to play the character of Pa Larkin was a “no-brainer”.

In fact, he told us: “Ask anyone who knows me, I am actually Pa Larkin.

“I can get anything for anybody.”

He also revealed that he had based the character of Pa Larkin on two people he knows very well, although he wasn’t planning to tell them until the series had aired to see if they guessed!

Bradley Walsh said: “When I was asked to play Pa Larkin, I said yes immediately.

Perhaps one reason was the fab toys Bradley gets to play with on set – including a 1933 Rolls Royce!

Bradley also confirmed there WILL be a Christmas special of The Larkins on ITV1.

But we’re told it’s “not what you would expect” from a Christmas special and has lots of “twists and turns”.

The Larkins starring Bradley Walsh as Pa Larkin starts on Sundays in October on ITV1.

Are you looking forward to watching The Larkins on ITV1? Leave us a comment on our Facebook page @EntertainmentDailyFix.