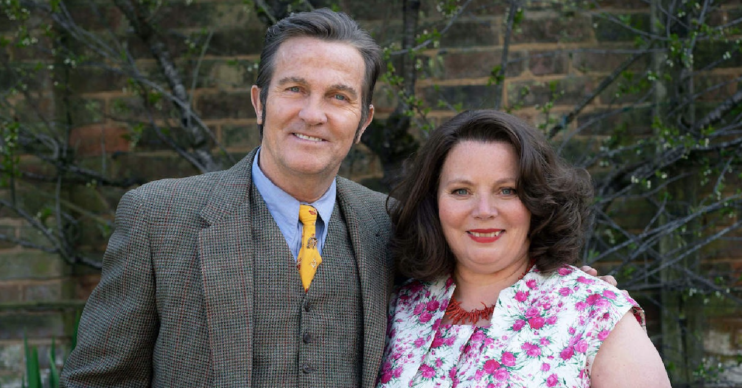 Bradley Walsh in The Larkins is coming soon to ITV and now the channel has released a first look image.

The Chase star Bradley, 61, takes on the role of the iconic Pop Larkin in the reboot, which also stars Joanna Scanlan.

What is Bradley Walsh drama The Larkins all about?

The image shows Bradley in period costume as Pop, a character first made famous by the novels of HE Bates.

In the 1990s, the novels were adapted by ITV as The Darling Buds of May, which ran for three hugely successful series.

What is Bradley doing in the image?

The image shows Bradley and Jo in full costume, smiling to the camera.

Bradley looks a world away from how fans normally see him on shows like The Chase.

Set in the late 1950s, The Larkins is the story of a working-class family led by the golden-hearted wheeler-dealer Pop and Ma.

Together they have six children, including the beautiful Mariette.

It’s set in the Kent countryside, where the Larkin family have carved out their own beautiful, simple life.

The original was famed for its easy-going, light-hearted rural stories, and ITV is hoping to recapture that same spirit.

Who else is in the cast?

Alongside Bradley and Joanna, relative newcomer Sabrina Bartlett takes the role of Mariette.

Sabrina is known for her roles in Bridgerton (where she plays Sienna Rosso), Poldark and Knightfall.

Read more: Bradley Walsh turned down Strictly Come Dancing – and here’s why he will NEVER do it

Upon taking the role made famous by Catherine Zeta-Jones, Sabrina said: “I am really REALLY excited to be taking on the role of Mariette Larkin in this new adaption of H.E. Bates novels.

“I can’t wait to bring these heart-warming stories to life alongside such a wonderful team. It’s just the perfect dose of escapism we all need right now”.

Other cast members include Tok Stephen, and the series will start in the autumn.