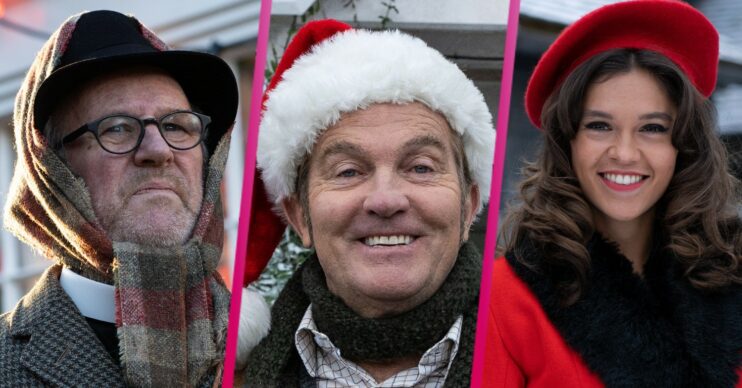 The Larkins at Christmas on ITV1: What time is it on? ITV reveals all the festive details!

The Larkins gets its first ever Christmas special, and it’s going to be a “perfick” addition to the festive schedules – so what can we expect from The Larkins at Christmas?

What will the feature-length episode be about, and who’ll be in the cast?

Here’s everything you need to know about The Larkins at Christmas on ITV1.

Read more: The Larkins Christmas special: ITV confirms when it will air!

The Larkins at Christmas on ITV1 – what’s it about?

Earlier this year, ITV confirmed there’d be a Christmas special of the ITV1 show.

But the plot has been kept under wraps until now…

We’re told that the village is buzzing with all the talk of the pantomime.

But not all is merry and bright – there’s an ongoing spate of burglaries with Miss Pilchester, the Normans and Johnny Delamere all among the victims.

Of course, PC Harness applies his, ahem, limited gifts to finding the culprit.

Meanwhile, Mariette and Charley take their love to the next level…

Pop and Ma are overjoyed to have the pair back for Christmas but there’s added pressure when Charley’s parents arrive to meet the Larkin clan.

Of course, nothing goes smoothly and the entire village is left without lighting and heating following a power cut!

Chaos descends on the Larkins farm, but we’re confident there’ll be a happy ending.

The Larkins at Christmas – when is it on?

The Larkins at Christmas will air on Christmas Day on ITV1 and the ITV Hub.

The feature-length episode starts at 9pm, and will finish at 10.25pm.

We recommend a liberal dose of sherry while watching!

It’s what Pop and Ma Larkin would expect!

For those who can’t wait until 9pm, the episode will be available on the ITV Hub from 7am on Christmas Day.

Read more: India Willoughby ‘ruins’ The Larkins as she admits ITV show makes her ‘think of Fred and Rose West’

Actress Joanna Scanlan, who plays Ma Larkin, has hinted that viewers should expect the unexpected from the Christmas episode.

She revealed: “It’s not necessarily what you would expect from a Christmas special.

“It has lots of twists and turns.”

She teased: “I think you think you know what you’re going to get…

“I will not say a word specifically but there are lots of twists and turns in it.

“It genuinely does remind you of what Christmas is about – what it really is about – as well as giving you, of course, I hope a lot of laughs and pleasure on the way.

Meanwhile Bradley Walsh, who plays Pop, revealed that fake snow was used during the filming in the Kent countryside.

The Larkins at Christmas cast

All our favourite Larkin clan will return for the festive special.

The first series of the drama – a revamp of classic The Darling Buds of May – aired earlier this year to much praise from fans.

On filming the Christmas special, Sabrina Bartlett said: “I’m definitely very excited and it’s so great to be back working with everybody again.

The cast of the TV series, including Bradley Walsh, have all admitted they’d love to return in a second series.

Bradley Walsh said: “Well to be fair, it would be great but I can’t keep going out and buying new clothes that are bigger.”

This comes after he revealed he had put on eight pounds in weight after eating all the delicious home-cooked food on set.

There are five Darling Buds of May books written by H.E. Bates in total, so there is plenty of scope for future seasons.

If the creators are dealing with one book per season, there could be at least five instalments in the series.

The original ITV series was first broadcast in 1991 and it aired for a total of three seasons.

The Larkins at Christmas airs on Christmas Day at 9pm on ITV1 and ITV Hub.

Will you be tuning in to The Larkins at Christmas? Leave us a comment on our Facebook page @EntertainmentDailyFix.