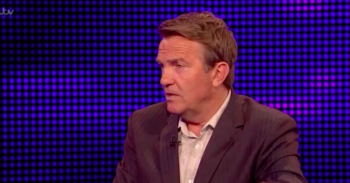 Why was she upset?

As host of The Chase, Bradley Walsh has to play the role of quizmaster, interviewer and moderator – sometimes even comedian and human stress ball.

On Tuesday (16 April), however, Bradley was forced to turn counsellor when a contestant burst into tears during the Final Chase.

Natasha joined Martyn, David and Sydney to take on the chaser in the hope of going home with thousands of pounds.

And, in a rather unusual turn of events, all four competitors made it through to the end of the ITV show to take part in the Final Chase.

Competing for an impressive £29,000, the foursome battled against Paul Sinha – aka The Sinnerman – for their share of the prize fund.

With Bradley firing out the questions, Paul slipped up a few times allowing the team to win some all-important pushbacks.

And in a satisfying end, the team won – meaning they went home with £7,250 each.

As the contestants congratulated each other and shared hugs, Bradley noticed that Natasha was crying.

He asked her: “You alright, Natasha?”

Natasha was quick to reassure Bradley that far from being upset, her tears were happy tears.

Having won, Natasha was able to take home the money which would help her and her husband set up a restaurant together.

We wonder if losing chaser Paul will be invited for a free meal?

Martyn and co leaving the building after that stellar performance. #TheChase pic.twitter.com/q4pmIfPbRe

What a brilliant episode of #TheChase
Full house
£29k
Total wipeout of the Chaser.
Best show on TV
It's that #BradleyWalsh person in charge.

More pushbacks than theresa May #TheChase

Viewers watching from home were impressed with the team, with one tweeting: “What a brilliant episode of #TheChase. Full house £29k. Total wipeout of the chaser. Best show on TV. It’s that #BradleyWalsh person in charge.”

One more exclaimed: “Best team I’ve seen on The Chase EVER. They deserved every penny.”

“More pushbacks than Theresa May,” joked another.

What is your favourite TV quiz show? Leave us a comment on our Facebook page @EntertainmentDailyFix and let us know what you think!