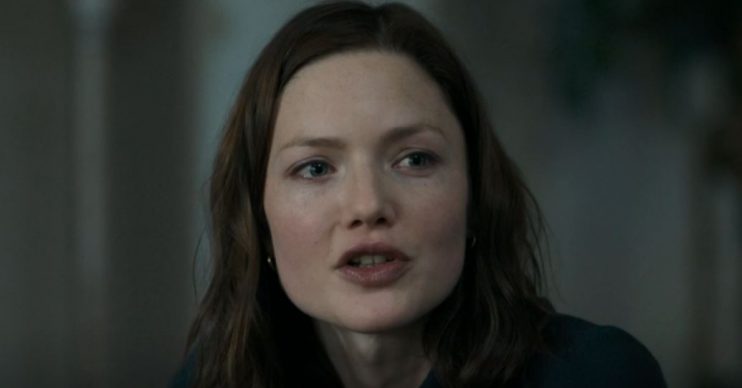 The Capture on BBC One: Ending divides viewers as some brand final episode ‘terrible’ and ‘a mess’

Could there be a second series?

BBC One drama The Capture has wrapped with a divisive ending that some viewers branded a “mess” and others admitted they “loved”.

She was sent by the Office of the Director of National Intelligence to investigate the ‘soldier fiasco’ and speak to Frank Napier (Ron Perlman), who assured her that fugitive serviceman Shaun Emery (Callum Turner) was close to being found.

And he wasn’t wrong. In the final episode, Shaun was put behind bars for the murder of Hannah Roberts (Laura Haddock), after being blackmailed by American and British intelligence into taking the fall for the killing.

It later emerged that Shaun did, in fact, kill someone – a man in Afghanistan, during his tour in Helmand.

Initially, she had wanted to expose the shadowy Correction organisation and stop Shaun from going to prison for something he didn’t do.

But when their efforts failed and Shaun was locked away, viewers saw her decide to join the force – apparently on a mission to fight it from the inside.

It was revealed in the closing sequence that Rachel still had the SIM card containing footage of Hannah getting on a bus that proved Shaun’s innocence.

After the credits rolled, viewers took to Twitter to blast the ending.

Another wrote: “That final episode was a mess and the ending was a damp squib. Shame because I enjoyed it a lot until then #TheCapture.”

A third tweeted: “Yet again another show with so much potential that has a terrible ending. #TheCapture.”

@BBCOne has a knack of making great shows like #bodyguard and #thecapture and then ruining them with poor endings. Just so weak, leaves me disinterested.

That final episode was a mess and the ending was a damp squib. Shame because I enjoyed it a lot until then #TheCapture

Yet again another show with soo much potential that has a terrible ending. #TheCapture 🚶🏿‍♂️

Well I thought the ending on the #TheCapture was rubbish!

But not everyone was turned off, as one fan of the show wrote: “I thought the ending to #TheCapture was good, I know many didn’t. Shaun pleaded guilty for redemption of a previous crime, but not the one he was actually accused of. There’d better be a S2!”

Someone else said: “Loved this series and the ending too. Leaves it open for series too and revenge!#TheCapture.”

Loved this series and the ending too. Leaves it open for series too and revenge!#TheCapture

So last episode of #TheCapture last night on @BBCOne – what a fantastic series and I was really satisfied with the ending. I get the feeling we may be seeing more of Carey…

What did you think of The Capture’s ending? Leave us a comment on our Facebook page @EntertainmentDailyFix and let us know.