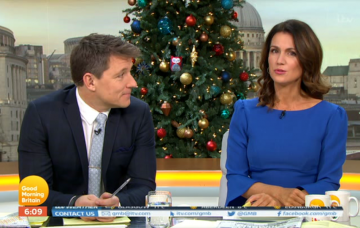 The presenter has been dating football chairman Steve Parish

Susanna Reid won’t be tying the knot anytime soon – just the thought of it brings her out in “hives”.

The Good Morning Britain presenter has been dating Crystal Palace football club chairman Steve Parish and recently said she was “back in the game”.

But the 47-year-old told TV co-host Ben Shephard on Thursday’s show that she will not be getting married.

Talking about the Four Weddings And A Funeral sequel set for Red Nose Day, she said: “Might get myself in there as a wedding guest.”

When Ben asked: “Why not as a bride?”, Susanna replied: “No, I don’t believe in weddings…

“That makes me come out in hives, the idea of getting married.”

Decent looking front row ready to scrum down- @kategarraway has def got that #thursdayfeeling (need to check what’s in her tea 😳🤣) @susannareid100 with the classic Thursday lean! #gmb pic.twitter.com/BjGfDA56FJ

When Ben said it was for charity, Susanna said: “Oh it’s just acting?”

The mother-of-three split from partner Dominic Cotton back in 2014 after 16 years, and hasn’t had a relationship since now – choosing to focus instead on her career, and on raising her three sons.

The star’s new romance with Steve came after the star admitted she was ready to find romance again following her split from Dominic.

She told Daily Mail’s You Magazine in October: “This is the right time of my life to explore that now. I’ve spent a significant amount of time since the split focused on the children and on work.”

She said that since her kids became more independent, she felt comfortable exploring her own social life outside of them.

Read more: Susanna Reid reveals when she knew her relationship with ex would end

Meanwhile, earlier this month, Susanna told The Sun about her new romance: “I’m happy and it’s nice, it was really important to me, post the split with [former partner] Dom, that I focused on work and the children.

“So, yeah, I did that, and obviously they are still the major focuses of my life.”

What are your thoughts on marriage? Leave us a comment on our Facebook page @EntertainmentDailyFix and let us know what you think!