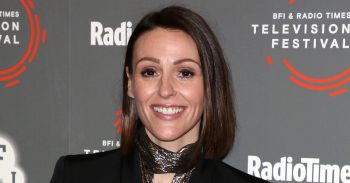 She got help from an intimacy co-ordinator

Suranne Jones got advice from a sex guru as she was worried about filming lesbian sex scenes for upcoming BBC period drama Gentleman Jack.

The actress, 40, has admitted she was “quite nervous” about the raunchy scenes she had to do as part of her portrayal of Anne Lister, the wealthy 19th-century diarist who wrote privately, often in code, about her intimate relationships with other women.

Her life is about to be explored in a biopic on BBC One later this month, with Suranne in the lead role as Anne.

She was anxious about the sex scenes so Sally Wainwright, the show’s writer, brought in renowned intimacy co-ordinator Ita O’Brien.

Speaking to the Mirror, Suranne said: “I was quite nervous about the sex scenes we had to do, because I thought they should be approached as sensitively as they could be.

“One of the great things she brought was an articulacy – we could talk about the scenes.

“She just started talking about body parts and positions in a matter of fact way, which just liberated us all.”

Suranne, who played Coronation Street‘s Karen McDonald from 2000 to 2004, said Ita worked to “sculpt” the sex scenes and the character’s positions.

Ita also helped them cut to the core of Anne’s relationships and make it about love, “rather than titillation,” Suranne added.

The movement director, who works on film, television and theatre projects, in addition to teaching at acting schools, thinks sex should be just as “carefully” choreographed for drama as scenes involving fights.

Ita explained: “Fight scenes in films are carefully ­choreographed and rehearsed. Sex scenes should be the same.”

Read more: Line of Duty fans think Dot Cottan will come back from the dead

Set in 1832, Gentleman Jack will tell the story of Anne as she returns to her Shibden Hall estate in West Yorkshire after a long period travelling, on a mission to breathe new life into her faded ancestral home and find herself a partner.

An exact UK air date has not been confirmed yet, although it was announced at the BFI & Radio Times Festival that the show launch this month.

It’s already on in the US, where the first episode aired on HBO in April.