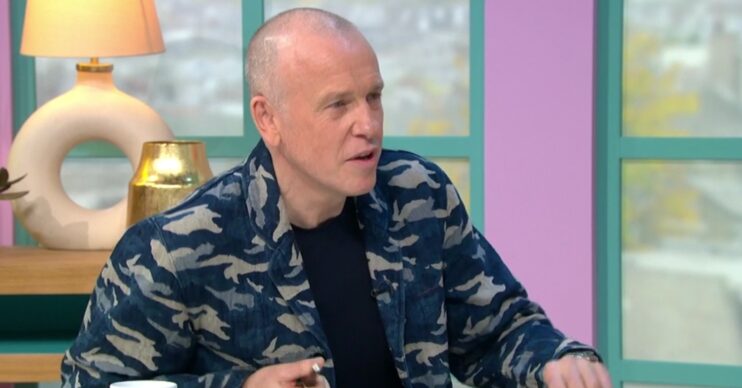 What is he wearing?!

Presenter Tim Lovejoy isn’t known for his dress sense, but his outfit for this week’s Sunday Brunch has really caught the eye of viewers.

In fact, many are wondering who on earth dressed him?

The 53-year-old presenter sported a blue camouflage shirt over a black top, and viewers are not a fan. For some viewers it was all they could see…

After spotting the outfit at the beginning of the show, viewers did not hold back on social media about Tim’s choice of shirts. One Channel 4 viewer tweeted: “Tim wearing his Nan’s curtains again.”

“Tim’s nan has just called Channel 4 – she wants her curtains back…,” said another.

Another added: “Someone really needs to have a word with Tim’s stylist. WTF is he wearing today?”

One viewer even joked: “Where’s Tim today I can hear him but I can’t see him.”

However, not every viewer had criticism for Tim. After a throwback clip was played, one viewer shared a compliment.

They wrote: “Oh wow, Tim looks younger now than he does in that old clip when he had more hair.”

Oh wow, Tim looks younger now than he does in that old clip when he had more hair. #SundayBrunch

The throwback clip showed Tim in younger years, before he opted for the shaved head hairstyle.

Tim’s nan has just called Channel 4 – she wants her curtains back.

This week, Tim and co-host Simon Rimmer were joined on the show by comedians Adam Hills and Rose Matafeo as well as musician Slash.

Sunday Brunch airs on Sundays from 9:30am on Channel 4.

What did you think of Tim Lovejoy’s outfit on Sunday Brunch today? Leave us a comment on our Facebook page @EntertainmentDailyFix and let us know what you think of this story.