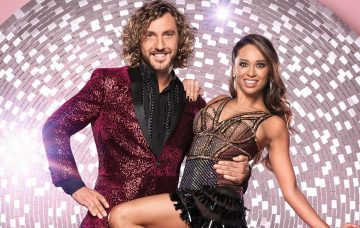 Onlookers said they didn't seem to care who saw them kiss

Has the Strictly curse struck again?

The comedian, 32, and professional dancer, 29, were photographed at around midnight last Wednesday, outside a pub in Central London.

A show insider also reportedly confirmed: “Seann and Katya hit it off from day one. They are always laughing and messing around, and are incredibly tactile with each other.

“It hasn’t gone unnoticed by cast and crew but no one expected this. It’s going to cause real ructions backstage not least because Katya and Neil have to work alongside each other week in, week out.”

Katya is married to fellow Strictly dancer Neil, who took to Instagram as the news broke, to post a supportive video of his wife with the Mock the Week star.

Seann has been dating actress Rebecca Humphries for five years. She was in the audience for Saturday night’s show, cheering Seann on as he and Katya performed the paso doble.

ED! has contacted Seann, Katya and Strictly’s representatives for comment.

On Saturday the comedian admitted he felt so guilty about causing injuries, that he burst into tears after dropping the professional dancer during rehearsals.

Speaking to the Daily Mirror, Seann said: “The list of injuries I’ve given Katya is long.

“I dropped her on her back and she lost two nails, and felt so bad I was genuinely in tears. I’d already knocked into her during a mistake in a dance, and she stabbed herself in the forehead with one of her nails.

“Then, during the dress rehearsal last Saturday, I accidentally chucked her into the stairs next to the judges’ desk.”

He also admitted he is terrified of disappointing Katya as he did during their recent jive, saying: “I messed up immediately.

“There was no point in which I was doing the dance properly. I got a step wrong and part of my brain was working out how to get back into the dance.”

What are your thoughts on the Strictly curse? Leave us a comment on our Facebook page @EntertainmentDailyFix and let us know what you think.