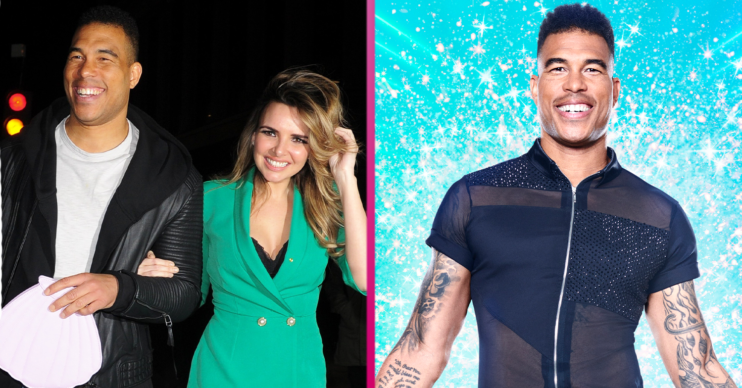 Nadine and their daughter are excited to see him dance

Strictly 2020 star Jason Bell has revealed his ex Nadine Coyle is “highly supportive” of him taking part in the BBC dance show.

Not only that, Jason said the former Girls Aloud star has also been giving him tips on how best to quickly learn dance routines.

Speaking to Entertainment Daily and other news outlets to launch the new series, Jason said he’s “flat-out nervous” ahead of the launch.

He said: “I am flat-out nervous but that’s a good thing for me. It’s one of those things where I just can’t wait to get started – that’s going to alleviate all these nerves, just get the party started.”

What does Nadine think of Jason Bell appearing on Strictly?

And the tot is just as excited as her mum to watch Jason perform on Strictly.

“They are highly supportive and they’re as excited as I am – they talk about it daily,” he said.

“Having their support is the key and really just wanting to go out there and represent them well. They mean so much to me,” he added.

Jason revealed Nadine – who he split from in September 2019 after 11 years together – has also been helping him by offering him some dance tips.

“We’ve talked about it,” he said. “Really it’s a timing thing, do I have enough time during the week to get these routines down?

“She’s done it her whole life and she’s like: ‘Yeah you do, but you’ve really got to lock in and be focused. I’ll help you and give you some tips and tricks.’

Jason does have a bit of a confession, though.

He has danced before!

“Not really professionally,” he insists.

Having their support is the key and really just wanting to go out there and represent them well. They mean so much to me.

“I took a dance class in college but I’ve always loved dancing.

“What I do, my role when I played the NFL, was always footwork related. So I’ve always been able to focus on my footwork and balance, you know, that’s dancing,” he added.

When it comes to the competition, Jason isn’t worried about others, he’s really just in competition with himself, he said.

“I’m definitely competitive but not against other people – I’m really in a competition with myself. I never really focus in on what other people have done because that deters me from getting better at what I can do and what I can control.”

He also isn’t looking too far ahead and says he’ll take things “week to week”.

“If you start looking past what you have in front of you then you can miss a step and not perform well,” he said.

So how will the professional sportsman cope with criticism from the Strictly judges?

“Well let me tell you something,” he said. “When you play professional sports your whole life, if you can’t take criticism, you’ve chosen the wrong profession.

“You’ve got to look at it from the standpoint that they’re giving you tips and tricks to go back and start to work on your game a little more.”

And the dance he’s most looking forward to?

“I really think the quickstep is one of the coolest things ever, just floating like that. I really want to get into that.

Head to our Facebook page @EntertainmentDailyFix and tell us if you’re excited to see Jason Bell compete in Strictly.