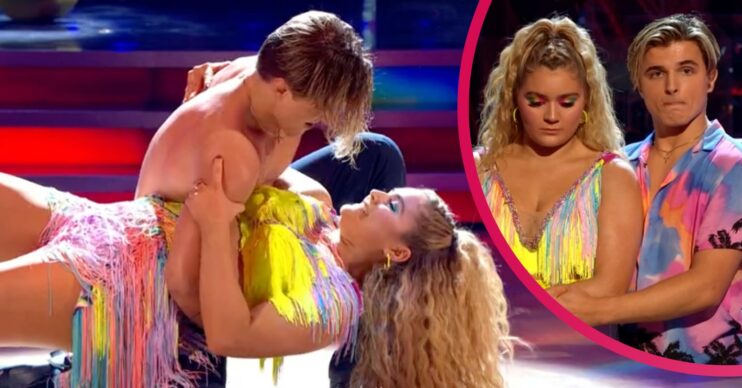 And Gordon didn't look too impressed!

Strictly Come Dancing fans were split after Nikita Kuzmin removed his shirt during his and Tilly Ramsay‘s decisive dance-off.

The 23-year-old pro dancer raised eyebrows as he stripped off during the pair’s battle to stay in the series.

But while many were not displeased to see more of the Ukrainian dancer’s chest, others thought his actions could have gone against him.

How did Strictly supporters react to Nikita taking off his shirt?

Many dedicated Nikita fans admitted they were left swooning by him getting his chest out.

One Twitter user cooed: “Love Nikita taking his top off, didn’t really look at the dance much after he was half naked lol.”

Another admirer agreed: “What a way to go out – just having a blast. Bless them (and bless Nikita for ripping his shirt off) #Strictly.”

And a third person drooled: “Nikita taking off his shirt was a hot moment. But it turned into a funny one when it got stuck between them #StrictlyComeDancing.”

Why some viewers thought it was a mistake

Other social media users reckoned Nikita went too far – mostly because the moment ‘backfired’ as Nikita tried to discard his shirt.

It was initially on his shoulder, but slipped down onto his still-attached microphone lead.

This meant the shirt jiggled in the air as if dancing with the Strictly pair.

Me when Nikita took his shirt off and ruined the rest of the dance #Strictly pic.twitter.com/ILqvXpsux8

One observer rolled their eyes: “Great move taking your shirt off Nikita. Gets tangled in the mic wire, distracting from your dance and could have tripped you up.”

I feel really sorry for Tilly.

“I feel really sorry for Tilly. That stunt by Nikita must have been really bloody off-putting,” criticised another viewer.

And a third tweeted: “Why did Nikita whip his shirt off in the dance off? It looked ridiculous still attached to his microphone wire. #StrictlyComeDancing.”

Was Gordon Ramsay unhappy with Nikita?

Some reports even claimed Tilly’s dad Gordon Ramsay – in the studio – looked ‘unimpressed’ as he applauded the pair’s efforts.

One Twitter user chuckled: “Gordon warned #Nikita about undoing his shirt buttons at the start. He knew they were going out so he thought have this!”

Despite the speculation, Gordon wrote on Instagram after the results show aired: “Words can’t describe how proud I am of these two, hard-working, polite, humble and incredibly down-to-earth [people].

“Most of all well done and what a celebration of youth and how happy it makes me feel.”

Does Nikita Kuzmin have diabetes?

However, other viewers pondered whether Nikita revealed a little bit more about himself than just his body.

Some claimed a small patch evident on the underneath of his left arm indicated Nikita is diabetic.

That’s because it is thought the disc is a glucose monitor.

“Nikita’s diabetic! We love to see the representation! (The white disc on his arm is a blood glucose sensor),” tweeted one person.

Another added: “The look on my little boy’s face was priceless when he realised Nikita was also wearing the same type of glucose monitor as him!”

And a third contributed: “Great to see #Nikita Kuzmin proudly wearing his flash glucose sensor on his arm on prime time telly tonight. Mine has transformed my life.”

ED! has contacted a representative for Strictly for comment.

Strictly Come Dancing next airs on Saturday December 4 on BBC One at 6.40pm.