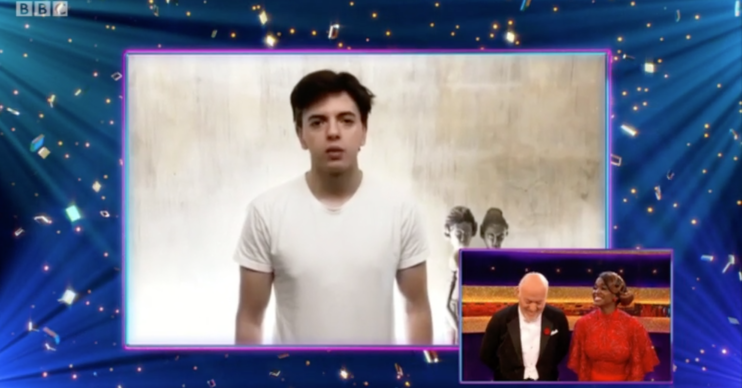 Dax, 17, appeared on Saturday evening’s show to congratulate his dad and partner Oti Mabuse on yet another great performance.

Last week Bill said he wasn’t even sure that his son was watching.

As Dax popped up on the video message, he quickly reeled in Strictly fans with his deadpan delivery.

He finished the link asking his old man to bring him something from the garage on his way home!

And he was a big talking point on Twitter!

All the points to Bill’s can’t-be-arsed son, such a nice change from the neverending parade of cheerleading family members #strictly #scd

I love Bill’s son so much rn #Strictly

Bill Bailey’s son on Strictly… get me something from the garage 🤣🤣🤣 The best of 2020! #strictly

Who is Bill Bailey’s son?

Dax is 17 and dad Bill has previously said of his unusual name: “The name came from a friend of ours who married an Indonesian man.

“They had a son called Dax and we just always associated it with being in Indonesia and always said: ‘If ever we have a child, that’ll be in the running’.

“At the same time I’d rather lost track of the various Star Trek spin-offs and was completely unaware that Dax was also the name of a character in Deep Space Nine until someone told me.”

And it seems they are very close, with Bill telling the Mirror: Bill said: “I’m quite relaxed as a parent. Maybe I should be more disciplinarian, but it’s not in my nature.

“We go cycling and paint-balling together, and I’ve taught him how to pitch tents. The way he’s turned out is my biggest achievement.”

Dax appears to be following in his father’s footsteps as he appeared in a film, Love Song, with him in 2015, playing young Bill.

Leave us a comment on our Facebook page @EntertainmentDailyFix and let us know what you think of last night’s show.