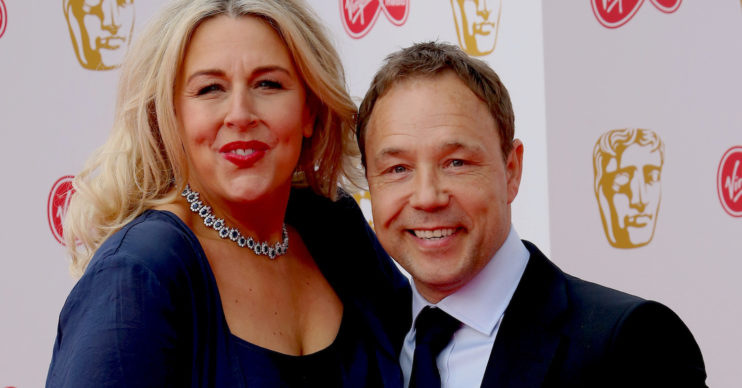 The ITV drama tells the tragic true story of schoolboy Rhys Jones, who was murdered in 2007.

Fans have praised Stephen’s performance of the cop who led the investigation into killer Sean Mercer.

But who is the man behind the character?

The couple met when they were both students at Rose Bruford College of Speech and Drama in London.

According to Stephen they were friends for years before anything romantic happened between them.

However, it was a heartbreaking event that brought them closer than ever before.

In the early Noughties, Stephen had a breakdown when he first moved to London.

Speaking on Radio Four’s Desert Island Discs, he revealed his parents were devastated to see their son in so. much emotional pain.

“I’ll never forget the tears coming down both their faces,” he said.

“My mum kind of saw it. Then everything came out. Life was worth living thankfully.”

Popped to see me old mate last night… he smashed it!!!!!

“This is kind of where Hannah came into my life properly,” he added. “She knew what had happened. She was always in close contact with my mum.”

From that moment on, the pair’s friendship grew stronger than ever.

But it wasn’t until Hannah revealed she was leaving the UK to move to Spain that a romance developed.

“We were waiting at New Cross train station and I said to her ‘please don’t go to Spain. I love you’,” Stephen revealed.

“She went ‘I’ve been waiting for five years for you to say that’. The next day we moved in together.”

Who is Hannah Walters?

If Hannah looks familiar, that may be because she starred alongside Stephen in This Is England.

She played the character trudy in the hit British drama.

The actress also took on the role of Beatrice in Pirates of the Caribbean: Salazar’s Revenge.

Her latest casting will see Hannah play Emily in Boiling Point, which is due for release next year.

Does Stephen Graham have kids?

During lockdown, Stephen shared a clip of Alfie shaving his head.

The hilarious moment was posted onto the Line of Duty star’s Twitter account with he caption: “Lockdown locks!!!!”

It’s safe to say, the results were interesting.