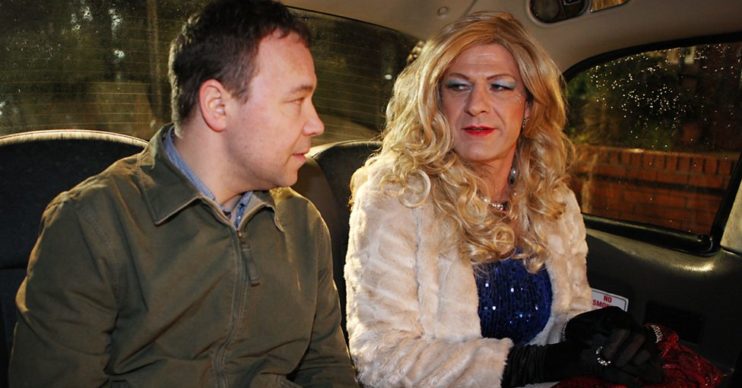 Time on BBC One: Stephen Graham and Sean Bean worked together on Jimmy McGovern’s Accused

Stephen Graham and Sean Bean are currently starring in Jimmy McGovern’s Time on BBC One, but it’s not the first time the pair have worked together.

And Sean in particular won plaudits for his portrayal of a beaten down transvestite, Tracie.

Read more: All the details you need on Time

In Tracie’s Story (Season 2, episode one) of Accused, Sean Bean’s English teacher character Simon finds himself in a dangerous love triangle as his transvestite alter ego.

Tracie falls for Stephen Graham’s character Tony after they get into a cab together following an altercation with a bigoted drunk.

Tony in turn develops feelings for Tracie, albeit reluctantly initially – but neglects to mention that he is actually married.

Against the odds, Tony comes clean to his wife and the men move away for a new life together.

But then Tony makes a confession that stretches Simon’s loyalty and lands him in the dock. And we’ll leave it there, because you really should watch it!

The Northern actor, best known for his gruff Alpha roles, admitted some nerves about taking on the role at the time.

He explained: “I’ve not played this kind of role before, and I never really thought I would. My agent rang up and said, ‘Have you ever thought about playing a transvestite?’ and I said, ‘Not really, no!’

“It’s a Jimmy McGovern script, which is exciting. I’ve always liked his stuff, I’m a big admirer of his work. She sent me the script and I read it and I was really impressed by it. It’s a very moving, unusual story.

“So I kind of knew I wanted to do it, but it was quite a long process reaching the character that I wanted to portray. Psychologically, it was quite a leap. A big leap. That takes some time to get to – it wasn’t just… bang, switch it on. You can’t just suddenly turn yourself into a character like that.

“It took a while, with how you carry it physically and also psychologically to get my head around it. That was quite a journey. I thought I’d got it, then I hadn’t. By the first day I just had to jump in feet first. Once I’d done that I’d knew I’d cracked it and felt good.”

Stephen Graham on his ‘love story with Sean Bean’

When interviewed back when the drama aired on BBC One, Line of Duty star Stephen said: “Being in a love story with Sean Bean is not what I’d ever expected, but acting doesn’t get better!

“I’ve always respected and admired Sean’s work. He’s a fellow Northerner and a good bloke to jump off the cliff with.

You’re never going to have another chance to dress up, put on high heels and cop off with me again.

“At the read-through I realised what a big leap playing a transvestite was going to be for Sean.

“I wanted Sean to know I was there for him from the start and I looked deep into his eyes.

“I was willing him to enjoy the experience, have some fun – you’re never going to have another chance to dress up like that, put on high heels and cop off with me mate, again.”

How to watch Jimmy McGovern’s Accused

If you have Now TV, you should have access to Roku TV – both series are available to watch there for no additional cost.

It is also available on Amazon Prime Video.

Let us know what you think of Time on BBC One on our Facebook page @EntertainmentDailyFix.