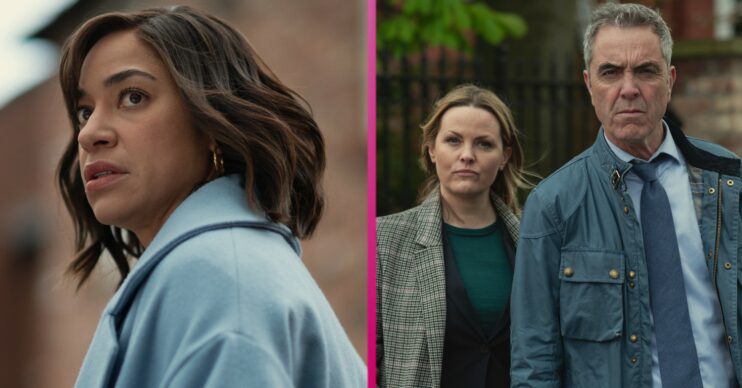 Stay Close has landed on Netflix and, like many of you, we’ve binged it in eight hours straight – so here’s our review.

It’s a brilliantly bonkers thriller with an A-game cast.

Stay Close left us wanting more, but also with a number of questions we still need answering!

Harlan Coben, are you reading this?

***Warning: spoilers from Stay Close ahead. Only read if you have watched the whole series***

Read more: Stay Close on Netflix: What is Harlan Coben’s thriller about, how many episodes is it and when does it start?

Stay Close on Netflix review and questions we still have…

1. What on EARTH was all the dancing about?

One minute you’re watching a thriller, the next minute it’s turned into Strictly.

But it turned out the couple were bloodthirsty killers themselves who would stop at NOTHING to get to the truth.

Even if that meant torturing and murdering innocent people like stripper Tawny Allure and lawyer Harry Sutton (so sad!).

Netflix series Stay Close doesn’t explain where the couple came from, or why they were such psychopaths.

That’s okay, we can live with that.

But the dancing?! WTF?

Before they embarked on their crime spree, the pair liked to dance together!

In an already bonkers series, this was possibly THE most surreal and implausible part.

Perhaps we just didn’t get it so, please tell us, what the HELL was it all about?

2. Stay Close Netflix review – is Dave the most forgiving man on the planet?

Megan’s husband Dave thought he was engaged to a charity working mum-of-three whose only ‘secret’ was her stash of Prosecco.

How wrong he was!

In fact, Megan had more skeletons hiding in her closet than an episode of Silent Witness.

Megan was Cassie – a former dancer in a strip club who had fled her former life after finding her stalker and abuser Stewart Green dead.

Stumbling upon his lifeless body in the woods, she knew she would get the blame.

So she legged it, and started a new life with a new name.

Of course, like all good secrets, the truth eventually spilled out.

Dave subsequently found out who he was about to marry – and FORGAVE her for lying to him for 17 years and putting their three children in danger.

If there’s a factory making Dave’s somewhere, we want one for Christmas!

3. Why did Lorraine take the wrap for killing Carlton Flynn?

At the end of Stay Close on Netflix, Lorraine was revealed as the murderer.

Not just any killer, though, an undetected serial killer for more than 17 years!

We had NO idea it was Lorraine – and it was a bittersweet twist for copper Broome who had fallen for her.

Lorraine confessed to murdering more than a dozen men during the carnival celebrations.

Her victims included abusive stalker Stewart Green, as well as other unkind and bullying men who preyed on women.

During her confession, she told detective Erin Cartwright that she had killed Carlton Flynn.

But viewers know it was Megan’s husband Dave who had killed Carlton – albeit accidentally.

In fact, Dave’s daughter Kayleigh and her friend had locked Carlton in his car after he put a date rape drug in their drinks and then turned violent.

Trying to cover his daughter’s tracks, Dave then pushed the car into a lake little knowing the man was in the boot.

So why did Lorraine say she had killed him?

We can only assume she was trying to protect Megan’s family.

Also, we know that Lorraine was dying of terminal cervical cancer, so had nothing to lose by adding one more victim to her already considerable tally.

4: Stay Close Netflix review – is Lorraine a villain or an ‘avenging angel’?

After admitting she was the killer, Lorraine told Broome she thought of herself as an “avenging angel”.

She killed her abusive husband, who beat her up while pregnant causing her to lose the baby.

Lorraine went on to murder other violent, abusive men just like her husband and Stewart Green.

She believed she was doing the world a favour.

Is the viewer supposed to have sympathy for Lorraine because we sure as hell did!

The closing music seemed to give us a clue.

The cover of Nina Simone’s classic Don’t Let Me Be Misunderstood says: “Don’tcha know that no one alive can always be an angel?

“When everything goes wrong, you see some bad.

“But oh, I’m just a soul whose intentions are good

A good series – like Sky Atlantic’s Landscapers – questions whether good or bad can ever be black and white.

Lorraine did wrong, but for the right reasons.

Stay Close on Netflix has left us desperate for another Harlan Coben adaptation.

We know that Netflix has entered into a multi-year exclusive overall deal with Coben.

As part of the deal, Netflix will work with Harlan Coben to develop 14 existing titles and future projects, into English language and foreign language series, as well as films.

Harlan Coben will serve as an executive producer on all projects.

The streaming service and writer of more than 30 books have already collaborated on several adaptations.

These include The Stranger and Safe.

Spanish adaptation The Innocent, French series Gone for Good, and Polish series The Woods are all available to watch on Netflix.

ED! has contacted Netflix for any news on forthcoming series.

During a night out in Vipers, Bea placed her nail in best friend Kayleigh’s drink to check it hadn’t been spiked – and, when the polish changed colour, she knew that it HAD!

Does such a nail polish exist in real life, though?

Sadly not, although it has allegedly been invented.

In 2014, four students from North Carolina State University came up with the idea of a nail polish that could detect date rape drugs.

However, critics questioned the feasibility of a nail polish that could accurately detect date-rape drugs without false positives.

The nail polish has never been released for public use.

Normal nail polish does not react to date rape drugs, either.

What did you think of Stay Close on Netflix? Leave us a comment on our Facebook page @EntertainmentDailyFix.