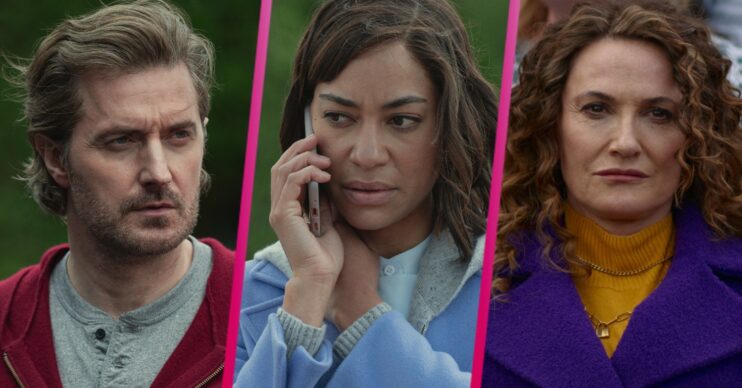 Stay Close on Netflix: What is Harlan Coben’s thriller about, how many episodes is it and when does it start?

Netflix’s Stay Close promises to be THE next big thriller to watch in the New Year – and we can’t wait to binge the episodes.

It’s another Harlan Coben adaptation, but this time it’s based on his book called Stay Close.

And the cast is bulging with some of the UK’s best TV actors.

So when does it start, who’s in the cast and what’s it about?

Here’s everything you need to know about the rollercoaster episodes!

Stay Close episodes on Netflix – what’s it about?

Stay Close is a tense thriller that questions how well you can ever REALLY know someone.

Meanwhile, Detective Broome is unable to let go of a missing person’s cold case – a local husband and father who disappeared 17 years ago.

And Megan is a working mother of three who has run away from a dark and dangerous past.

But is she really happy with how her life has turned out?

When an old friend from Megan’s past turns up to deliver some shocking news, it impacts on all three of the characters.

The past comes back to haunt them, and threatens to ruin their lives and the lives of those around them.

Is Stay Close based on a book?

Stay Close is based on Harlan Coben’s book of the same name.

The Huffington Post says of the book: “Fiction reading doesn’t get much better than this.”

Fans call it a “stirring thriller”, like a “rollercoaster” and promise “a massive twist at the end”.

How many episodes is Stay Close on Netflix?

Stay Close will be eight episodes.

So you can binge the whole series in eight hours straight!

All episodes will be available from that date.

It’s certainly one way to see in the New Year!

Series usually stay on Netflix indefinitely, so you’ll have lots of time to binge watch it at your leisure!

James Nesbitt stars in the new thriller, fresh from his roles in crime dramas Bloodlands and Line of Duty.

He plays Broome, the detective who’s unable to let go of a missing person’s cold case.

TV viewers will know her from The Good Fight, The Beast Must Die, Deadwater Fell and The Good Wife.

Bancroft’s Sarah Parish is also in the cast.

Sarah portrays Lorraine, a friend from Megan’s past who arrives on the scene to bring some news that could destroy the lives of Megan, Broome and Ray.

How will they all react – will it be fight or flight?

Comedian and actor Eddie Izzard also stars in the episodes.

He plays Harry Sutton, a solicitor in the sleazy end of town.

What other Harlan Coben books have been adapted by Netflix?

The previous adaptations include The Stranger, Safe and The Five.

Gone for Good also arrives on August 13 2021, which has been adapted for French TV.

Harlan Coben has a five-year deal with Netflix to turn 14 of his titles into film and TV dramas.