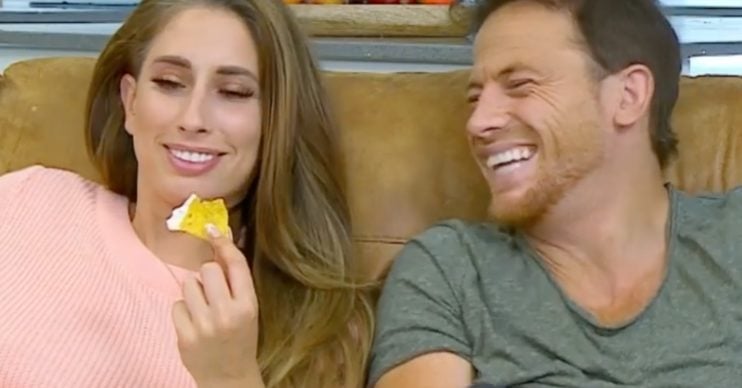 That never happened...You're an idiot. That's not how it went

Stacey Solomon told her boyfriend Joe Swash to ‘shut up’ after he revealed an intimate sex confession during one of their scenes on Channel 4’s Gogglebox.

The loved up pair joined a whole host of other celebrities watching TV in their homes for the first episode of the new series on Friday night (June 5).

Read more: Eamonn Holmes brands Gogglebox ‘idiotic and cruel’ for edit of him

You know what this reminds me of? When we first met.

Celebrities including Jamie Theakston, and This Morning pair Ruth and Eamonn Holmes watched a variety of TV programmes, including Oscar-winning film The Favourite.

During the film, Olivia Coleman as Queen Anne tells Rachel Weisz’s character, Sarah Churchill, to “[bleep] me,” which apparently sparked Joe’s memory of the early days of his relationship with Stacey.

Joe said: “You know what this reminds me of? When we first met.”

Stacey was quick to dismiss, as she replied: “That never happened…You’re an idiot. That’s not how it went.”

But Joe replied: “That’s exactly what you said to me.”

Giggling Stacey said: “No it isn’t, shut up!”

Embarrassed Stacey could be seen laughing as she tried to keep boyfriend Joe quiet before he revealed anything else.

The pair have been dating since 2016, and now live together in Essex. They welcomed a little boy in May last year.

Stacey Solomon and boyfriend Joe were a welcome sight to Gogglebox viewers, with viewers taking to Twitter to praise the pair:

Joe also revealed he had had to call for an ambulance aged 11 when his dad suffered a heart attack and died.

A scene in 999: What’s your Emergency? sparked Joe’s memory as he recalled the incident.

When he starred on Dancing On Ice, Joe broke down in tears as he performed a dance in his father’s memory.