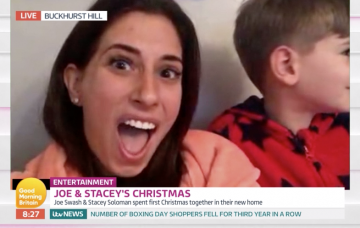 Stacey Solomon gave boyfriend Joe Swash a telling off for lying about their sex life in a surprise video call to Good Morning Britain.

The Loose Women star roasted the I’m A Celebrity… Extra Camp host after he apparently revealed they wear blindfolds in bed.

She got in touch with the ITV breakfast show while Joe was telling viewers about new Netflix film BirdBox, starring Sandra Bullock, where characters cover their eyes to avoid being killed by a mysterious force.

Asked whether he and Stacey wear blindfolds, like fans of the horror movie who’ve taken to social media to share selfies, he quipped: “No, no, not on Christmas Day. But we do wear blindfolds sometimes.”

Unaware that his partner was about to make a surprise call on FaceTime, Joe then dug himself an even deeper hole.

Speaking about spending Christmas Day at their new home with both of their families, he added: “We’re cooking for 15 people and we’ve just really worked out that Stacey makes a good site manager.

“She doesn’t actually do very much, she sends people in the right direction.”

Stacey, 29, then appeared via video link with six-year-old son Leighton to haul Joe over the coals and put the record straight.

She said: “That’s an interesting take you’ve got on Christmas, Joe. And PS, we don’t wear blindfolds ever, for anything!”

“Sorry, I didn’t realise we would be FaceTiming. Stacey was amazing Christmas Day. She’s done all the work.

“Usually you’re asleep when I do GMB,” he told her. “I thought you were going to miss all this. I don’t know whether to go to my mum’s tonight or not.”

After saying goodbye to his girlfriend, Joe told viewers: “That was a surprise. That’s me in trouble. I’ll be back tomorrow after spending tonight at my mum’s.”

Do you reckon Joe is in the doghouse? Leave us a comment on our Facebook page @EntertainmentDailyFix and let us know what you think!