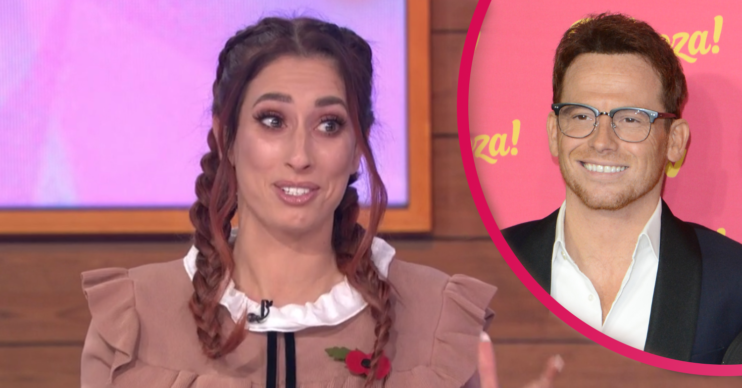 Joe lost his father when he was young

Stacey Solomon has revealed that partner Joe Swash “struggles” with grief after the death of his father.

What was Stacey Solomon chatting about on Loose Women?

The chat turned to whether the panel members would do something similar.

Stacey then talked about Joe, and the loss of his father.

Joe lost his father Ricky from an undiagnosed condition when he was only 11-years-old.

Stacey told viewers that Joe is the total opposite of Kanye and Kim, preferring not to have reminders of his father around the house.

“Whenever something big in his life happens, like when Rex was born, he really struggles,” Stacey said, about the way he handles grief.

I tell him that we should have photos of his dad around the house, but he doesn’t want them.

“I tell him that we should have photos of his dad around the house, but he doesn’t want them.”

Kaye Adams chipped in, saying that she prefers not to look at images of her late parents because that’s just the “way she is”.

Stacey replied: “I think [Joe’s] a lot like you – he doesn’t want to think about him every day.”

What else has Joe said recently?

Father-of-two Joe – as well as helping to look after Stacey’s two children from a previous relationship – said he’d like another baby Rex running around soon.

On a recent episode of Loose Women, Joe said: “We’re going to talk about how I would love to have another little Rex running around.”

Stacey looked flabbergasted and replied: “How come I didn’t know about any of this!?”