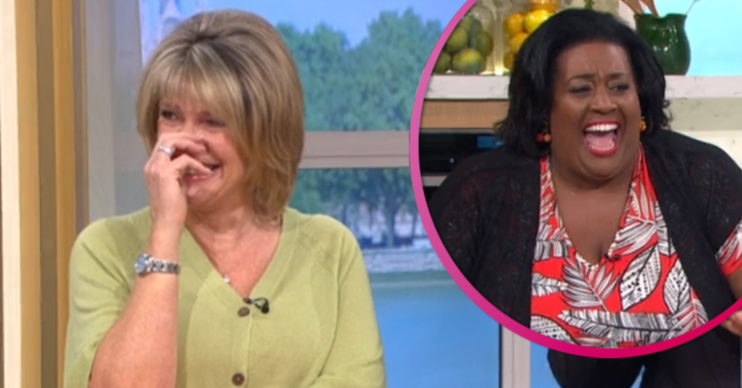 Alison cooked up a recipe she found online

Alison Hammond left Ruth Langsford in giggles today as she suffered a blunder in a hilarious cooking segment on This Morning.

The presenter whipped up her “one pot wonder”, which she confessed wasn’t a family recipe but in fact something she saw in an online subscription!

However, Alison, 45, thought she had burnt the food before burning herself by picking up a hot pot.

What did Alison Hammond do in her This Morning cooking segment?

I just got it off that and just copied the recipe.

Host Ruth asked: “Is this one of your mum’s [recipes] Alison?”

Alison replied: “It’s not actually. This is just one of those, you know, online subscriptions,” as she burst into laughter.

She added: “I just got it off that and just copied the recipe.

“I saw the recipe and just thought, ‘I’ll do that on the show.'”

Alison then cooked the dish but minutes later, she suffered an unfortunate mishap.

As the dish continued to cook on the hob, Alison picked the pot up by its handles.

She said: “Oh that’s really hot!” as she quickly took her hands off.

So @AlisonHammond, where exactly did you say your delicious one-pot chicken and chorizo rice recipe comes from again? 🍴😂

If you’d like to give it a go, all the details you need are over on our app!

Alison and Ruth burst into fits of laughter, as the host said: “Use an oven glove!”

Alison then unveiled the finished dish as Eamonn and Ruth tucked into theirs.

Viewers were in hysterics watching Alison in the kitchen.

One person said on Twitter: “Alison is a star, cooking on a hot stove then tries to lift the hot dish with no oven gloves, oh that’s hot that.”

Another wrote: “One pot wonder just throw it all in the pan and hope for the best Alison.”

A third added: “You cracked me up when Ruth asked if it was a family recipe – love your honesty.”

#ThisMorning Alison is a star , cooking on a hot stove then tries to lift the hot dish with no oven gloves 🤣🤣🤣 oh thats hot that 🤔