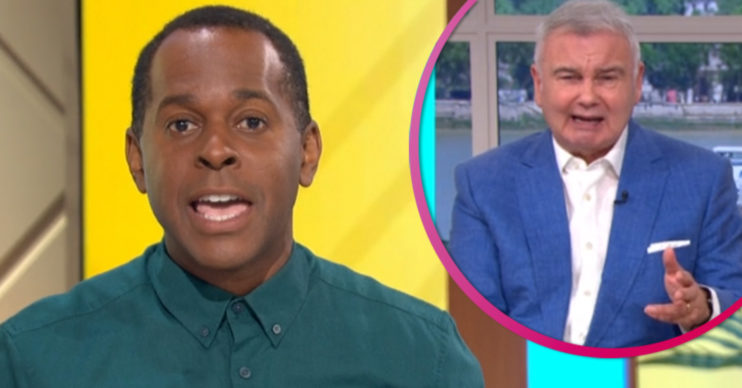 Andi had the perfect comeback!

Andi Peters laughed as Eamonn Holmes made a hair transplant dig at him today.

Andi is currently filling in for Lorraine Kelly on her morning show and has been a hit with viewers.

On Monday’s episode, the presenter cut to Eamonn and wife Ruth Langsford to find out what was coming up on This Morning.

Read more: This Morning fans in fits of laughter as consumer editor accidentally swears at viewer during phone-in

What did Eamonn Holmes say to Andi Peters?

As a segment on hair transplants was coming up on This Morning, Eamonn joked: “Andi, something for you as well. Have you ever thought about the old hair transplant?”

Eamonn added: “I’m just saying have you ever thought about it because we’ve got all the advice.”

Andi then said: “You’ve only got it Eamonn because you’ve got a voucher that says if you get a friend to go you’ll get a £5 kick back.”

Andi, something for you as well. Have you ever thought about the old hair transplant?

Lorraine viewers have been thrilled with having Andi as host over the last week.

Last week, Andi thanked fans for their kind messages of support after they called for him to have his own show.

One fan wrote on Twitter: “@ITV you should be looking to give the warm, funny, genuinely entertaining star that is @andipeters more air time or even better his own show.

“He is so endearing you just have to love him.”

Meanwhile, ahead of his Lorraine debut, Andi said: “From the week beginning the 10th of August, I’ll be there.”

Lorraine Kelly recently revealed: “Actually, I’ve been trying to get Andi to present my show for ages but he’s always been away filming in exotic locations.

Read more: Andi Peters thanks fans as they beg for presenter to get his own ITV show

The star is sharing hosting duties with Christine Lampard, who regularly stands in for Lorraine.

Christine is set to return to the ITV show from August 24 to September 1.

Do you enjoy watching Andi on Lorraine? Leave us a comment on our Facebook page @EntertainmentDailyFix and let us know.