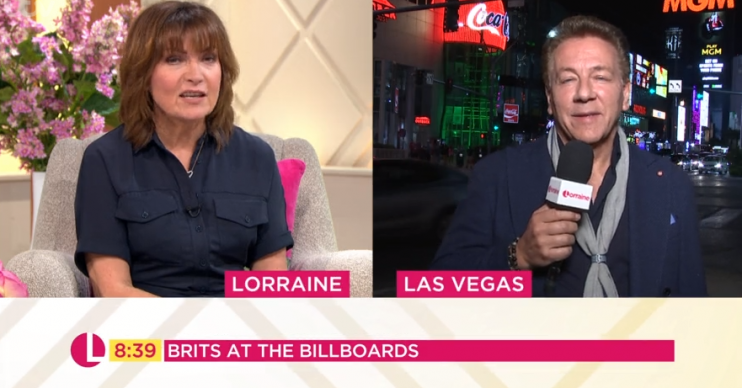 Viewers were quick to spot the gaffe

Lorraine viewers were left shocked when Ross King presented in front of a huge advert for prostitutes.

During Thursday’s show, Ross was trying to explain how British acts did at last night’s Billboard Awards live from the Las Vegas Strip.

But the presenter was quickly photobombed by the naughty advert, which featured three naked women.

The mobile manner read: “Girls to your room,” above a phone number for what is seemingly for some rude services.

Ross wasn’t aware of the advert and continued his broadcast.

However, it didn’t go unnoticed by viewers watching from home as they took to Twitter to discuss the awkward gaffe.

One person said: “That mobile billboard behind Ross King on #Lorraine.”

Another wrote: “Anyone else waiting for the [expletive] van to make another appearance? Certainly more interesting than anything Ross has to say #Lorraine.”

A third added: “@reallorraine have I just seen a billboard behind Ross king advertising naked women sent to your room. OMG.”

Meanwhile, the Billboard Awards took place last night in Nevada and Ed Sheeran and Ella Mai were among the British winners.

Back in February, Ross suffered another awkward blunder when he tried to interview Alfonso Cuarón at the Oscars but failed.

Shouting across to Alfonso, Ross said: “Hi Alfa! Congratulations! You’re live on British TV! Good to see you. There we are!”

Alfonso shook Ross’ hand and then turned to BBC reporters to chat.

Trying to get a few minutes with Alfonso, Ross mumbled to himself: “Hold on just one second here… there we are… look at this…” as Lorraine Kelly waited back in the studio.

Ross managed to get hold of Alfonso and asked: “Where’s your Oscar?” to which Alfonso replied: “Ebay!”

Ross asked: “Can I put in a bid for it? I’ve got 50 of our great British pounds. Will that take it?”

As Alfonso just looked back at him, Ross said: “That’s looking like a no then.”