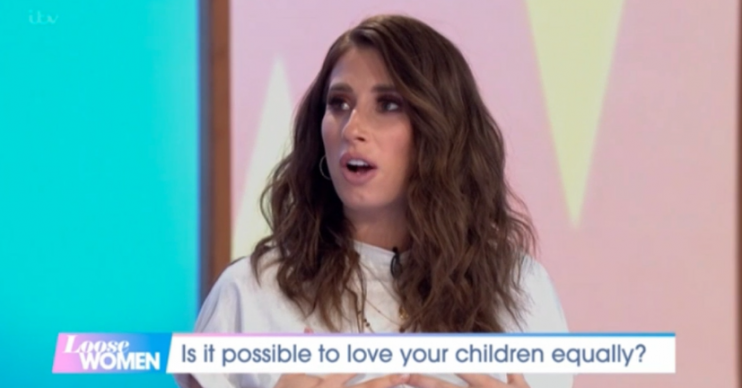 She already has two sons

Stacey Solomon became emotional as she admitted she’s worried she won’t be able to spread her love between three children.

The Loose Women panellist has sons Zachary, 11, and Leighton, six, and is pregnant with her third child – her first baby with boyfriend Joe Swash.

During today’s edition of the show, Stacey said she gets “anxious” about having to share her love with another child as the panel discussed whether it’s possible to love your children equally.

She said: “I get emotional over a lot of things these days. I was just thinking about this other human coming along and I get really anxious about spreading the love between three people and not just two.

“I’ve been able to do two for the past several years and I just feel guilty, especially for my youngest. He’s loved being the youngest and still really enjoys being the baby of the family.

“I don’t remember thinking I won’t be able to do two. But this three thing, I think maybe it is the hands thing. I’ve only got two arms.”

Stacey added: “I know it’s totally hormonal and quite irrational and I’ve realised I’m actually over the moon and so excited for the new dynamic to start.

‘I thought about this other human coming along, and I got really anxious about spreading the love between three people.’

Do you worry about trying to love all your children equally like our @StaceySolomon? 💕 pic.twitter.com/3qRdGhOpFO

“I just have these moments where I feel an overwhelming feeling.”

Her co-star Nadia Sawalha assured Stacey by admitting she felt she was about to be “unfaithful” when she was preparing to have a child.

She said: “I felt like I was about to be unfaithful.

“That’s what I can liken it to most. I was obsessed with this baby was going to come in and I was going to dump [my daughter] – you just get double the love!”

Stacey announced in February that she and Joe were expecting their first child together.

Last month, the star revealed her anxiety about having to spread her love.

Alongside a photo of herself walking hand-in-hand with her two boys, Stacey wrote: “Was about to post this and for some reason got a bit emotional thinking, I don’t have three hands.

“I need to grow another hand! How am I going to hold all of their hands? I don’t want to let them go EVER! (even though I’m sure my 11 year old will be over the moon about it).

“Ridiculous I know but I’m going to blame the hormones. So strange to think that soon two will become three.”

Do you believe it’s possible to love your children equally? Leave us a comment on our Facebook page @EntertainmentDailyFix and let us know.