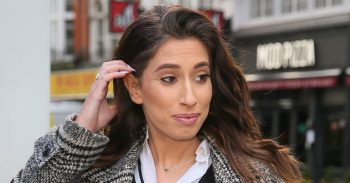 Pregnant Loose Women star Stacey Solomon is expecting her first child with Joe Swash and the pair have remained tight-lipped over the due date.

But at a pregnancy bash held today (April 28th), one famous guest appeared to slip up and reveal when we can expect little Swash-Solomon to arrive.

Posting on her Instagram stories on Sunday, Stacey, 29, told her followers she was heading out to a fancy pregnancy party hosted by her good pal Lydia Bright, from TOWIE.

Lydia, 29, who was also in the clip, explained: “A pregnancy party, because all my friends are pregnant!”

Stacey moved the camera to show fans the beautifully decorated room, which featured balloons and a massive spread of food and sweet treats.

Stacey said: “Lydia you’re so clever! I genuinely thought I was really proactive today by changing my clothes and putting some lipstick on, but look what you’ve done!”

Posting about the party on her own Instagram, Lydia revealed that six of her closest friends are expecting.

She wrote in the caption of one pic: “My beautiful pregnant friends, it’s all happening at once and I’m so excited.”

Their pal Denise Van Outen was also at the party and she posted about the event on social media.

But in one pic, posing alongside Stacey and Lydia and cradling Stacey’s bump, Denise appeared to give away her friend’s due date. Oops!

She captioned the snap: “Only five weeks to go. Baby shower hosted by @lydiabright for @staceysolomon & friends #babyshower #essex.”

Fans rushed to the comments, most of them in shock that Stacey’s baby is due so soon.

One said: “Surely it can’t be five weeks left for Stacey! They only announced towards the end of February that they were expecting!”

Another wrote: “She had a bump when they went public in Feb, she was about five-plus months then. They must have kept it quiet til they knew everything was ok. Can’t fault them really. Stacey looks amazing.”

A third commented: “OMG five weeks left before Stacey’s due, where did time fly by?”

Stacey revealed news of her pregnancy in February.

She already has two children from a previous relationship – sons Zachary, 11, and Leighton, six. Her boyfriend, former EastEnders actor Joe Swash, has an 11-year-old son, Harry, from his relationship with ex Emma Sophocleous.