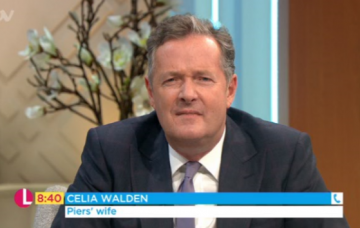 Piers Morgan’s wife embarrasses him by phoning in to Lorraine!

Ceila Walden has a theory about why Piers is looking so young these days!

Piers Morgan was stunned this morning when his wife interrupted his live interview on Lorraine!

Celia Walden surprised her husband by calling into the ITV show while the Good Morning Britain host gamely went on to share his “beauty secrets”.

Lorraine Kelly had insisted he reveal why he’s looking so much younger following his time off over Easter.

She had told him on yesterday’s GMB: “You’ve had work done! You look like a boiled egg! You haven’t got any wrinkles anymore and we want to know where they have all gone!”

Piers, 53, agreed to be interviewed today, and insisted it was all his own “natural beauty”.

He said: “It’s no surgery or Botox, this is the real me. Here’s the truth, the morning show is an absolute killer. You have to get up at a ridiculous hour and normally have about four breakfasts before 10am because you are starving all morning. You are then too exhausted to work out and end up guzzling wine and cheese.”

He said the reason he’s looking so much better is because he’s been on holiday in LA, where he was able to exercise and catch up on his sleep.

“The difference is I just went to LA for three weeks and suddenly I am not getting up to early, I have a nice swim and a spin on my bike and a walk in Beverley Hills. Then I can have as much wine and cheese as I want as I’m a lean machine!” he said.

But little known to Piers, Lorraine had a trick up her sleeve to check he was telling the truth – his wife!

Lorraine surprised him by saying, “we’ve got Celia here…”, to which he replied, “What do you mean you’ve got her?!”

When he was told she was on the phone, he joked: “Don’t say a word before consulting my lawyer!”

Celia, a journalist, has been married to Piers since 2010 and they have a daughter together called Elise. She’s also step-mum to his three sons from his first marriage.

The 42-year-old told Lorraine of the secret to Pier’s youthful look: “I’m afraid he is telling the truth.”

But she then embarrassed her husband by putting forward her own theory on why he looks so wrinkle-free.

“I have a theory about Piers’s freakish smooth forehead,” she explained. “His ego is so large it is pushing outwards and plumping the skin from within.

“I have yet to get a dermatologist to substantiate this but I’m a pretty sure it’s what’s going on!”

A surprised Piers exclaimed, “what?!” before joking, “why don’t you get back in the kitchen… I’m not having you say this on live TV!”

Ignoring his sexism, Celia then added: “Unfortunately it is exactly as he said. When I came down this morning I saw the remnants of his beauty regime by the sofa – and that was an empty glass of red and a cheese rind!”

Piers said he’d discovered exercise is the best anti-ager, pointing out it’s been the same for Lorraine who looks “20 years younger” since she took up dance classes.

The Scottish presenter, 58, agreed, admitting she was “too scared” to get anything done.

Piers said she was right to be wary, as he isn’t a fan of the cosmetic surgery-enhanced faces he often sees in LA.

“I’ve told Celia if she has this stuff to her face, then we are done,” he said.

He added: “The secret to just looking remotely OK is exercise, eating healthily and be careful. Don’t go to a plastic surgeon who carves up your face and makes you look ridiculous.”

So now we now Piers’s beauty secrets! Maybe he’ll have his own beauty vlog next!