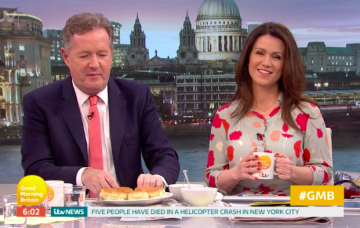 We all know Piers Morgan loves to wind people up – and his Good Morning Britain co-presenter, Alex Beresford has found himself a target… yet again.

On Monday’s show, the TV presenter ripped into the weather star for being a no-show the morning after the Dancing On Ice final.

At the start of the episode, Piers, 52, welcomed replacement presenter Lucy Verasamy.

He told her: “What a refreshing treat to not have Beresford sitting there whining at me. Where is he anyway?”

When co-host Charlotte Hawkins explained he was having a lie-in following his appearance at the Dancing On Ice final, Piers looked furious.

“Why was he there? I thought he came fifth? How humiliating, oh dear,” he said.

Returning to the subject again a few minutes later, Piers complained: “Beresford was at the final party for Dancing On Ice, despite coming fifth. And then pulled a sickie.

“I was like, ‘Really mate? You’re celebrating coming fifth so much you can’t come to work?’ Anyway…”

Clearly not concerned about digs from his colleagues, Alex, 37, made the most of his big night.

He posted a series of videos to his InstaStories from behind the scenes of DOI, where Jake Quickenden was crowned winner.

Later on, he added a video from the after party, showing a room full of people dancing to Beyonce’s Crazy In Love.

And – unsurprisingly – on Monday morning, he added a picture of himself in bed with a hangover, captioning it: “Head hurts…”

He also took to Twitter to write: “Oooo my head hurts! @dancingonice wrap party went off 😜”.

Read more: Peter Andre reunited with his ex-girlfriend Mel B in cosy picture

This isn’t the first time these two have taken swipes at each other.

When Alex was eliminated from Dancing On Ice last month, Piers was first in line to mock him.

During the ITV show the following morning, Alex began: “I had an absolutely amazing time, eight weeks in…”

Piers interrupted him, saying: “Yeah whatever. Do you know what, before you give us a speech about how thrilled you are to have been dumped out before you even made it to the top three…”

Alex laughed it off, even when Piers said Alex had tried to re-position himself away from being “the weather guy”, by trying to join the main presenting team.

Alex went on: “I went out on a high, I could not have done any better…”

Piers interrupted him again, saying: “Well you could’ve done better, you could’ve won. So it’s not that much of a high, is it? You didn’t even win a bronze medal, and you know how I feel about bronze medals.”

Piers asked Alex where he’d come in the competition and, sounding defensive, Alex told him: “So I finished fifth.”

“Right, so, ‘I went out on a high, I finished fifth’ – are not words you’ll ever hear from me,” Piers told him.

Get a room, you two.

Do you think Alex and Piers like each other really? Leave us a comment on our Facebook page @EntertainmentDailyFix and let us know what you think!