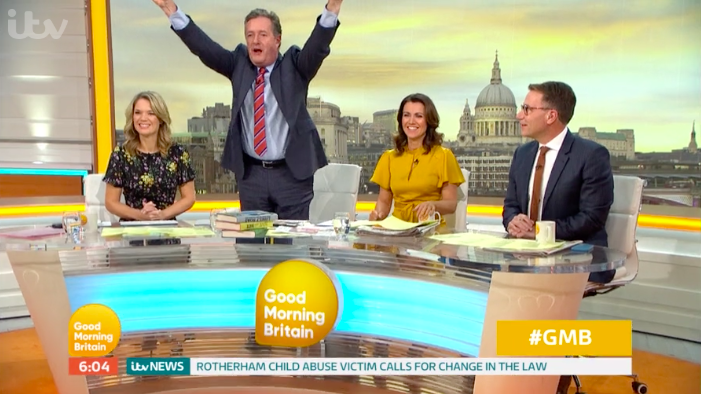 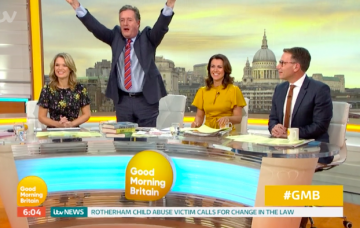 He loves to be centre of attention

There’s no one who loves a headline-grabbing feud more than Piers Morgan.

And he just started a brand new one, as he made a scene on Wednesday morning’s Good Morning Britain.

Viewers were alarmed as the TV presenter started the show by standing up and shouting about meat.

This happened.
We're five minutes into the programme.

It's going to be an interesting morning on #GMB… pic.twitter.com/c6cg0rkhhS

The 53-year-old started the show by saying: “There’s not enough time today” to go through everything he was angry about.

His main issue was over a vegan protest that happened in a Brighton steak house.

He started his morning moan by telling his beleaguered colleagues, Susanna Reid, Charlotte Hawkins and Richard Arnold: “Everything loony happens in Brighton these days. Brighton’s always been on a slippery slope.”

He then described Brighton vegans as: “A more unpalatable group you could rarely wish to meet,” before praising a stag group who happened to be in the steak house and chanted: “Stand up if you love red meat.”

The divorced dad-of-four then stood up on set and started shouting the mantra himself, before adding: “Everything offends vegans.”

He later took to Twitter to write: “Stand up if you love red meat!” for his 6.48m followers.

‘Stand up if you love red meat!’ https://t.co/jGKxagOS8C

Viewers watching were divided by the controversial star, with one commenting: “Why does anybody still employ him!?” Another said: “That is awful. I hate it.”

A third explained: “Not eating meat is nothing to do with the taste, it’s about not wanting an innocent animal to suffer and die .. having compassion and a conscience is something I’m proud of.

“It’s not something to be ridiculed.”

Many others found it amusing, with one tweeting: “@piersmorgan winding vegans up since 6am 😂.”

A third added: “Piers Morgan is so entertaining first thing in the morning. Always cheers me up.”

It comes after Piers failed to get much reaction from Little Mix, despite his many attempts at goading them.

He also took on David Beckham this week, slamming the former footballer for kissing his seven-year-old daughter Harper on the lips.

Do you agree with Piers about vegans? Leave us a comment on our Facebook page @EntertainmentDailyFix and let us know what you think.