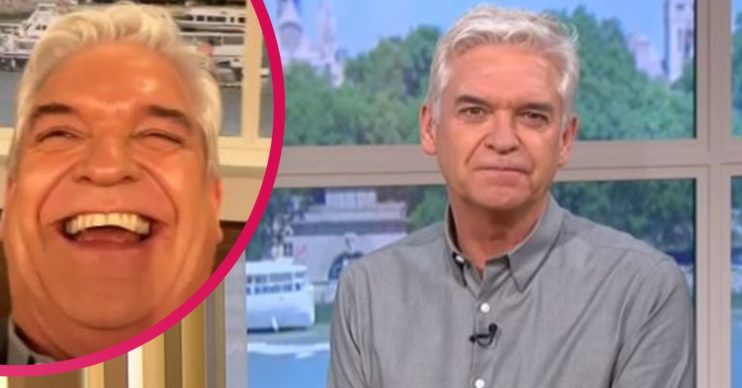 This Morning’s Phillip Schofield in hysterics after interviewee mix-up

They thought he was scallop diver Guy Grieve

This Morning host Phillip Schofield laughed hysterically on social media as he revealed he and Holly Willoughby mixed up their guests.

In a behind-the-scenes clip from today’s (Thursday, October 8) episode of the ITV daytime show, Holly was seen apologising to someone on video link.

What did Phillip Schofield say about the guest mix-up on This Morning?

Phil, grinning, explained in the video on his Instagram Stories: “We have just spent five minutes talking to a man about scallops because he has a fascinating life getting scallops from the Isle of Mull.

“He said, ‘Well I don’t know much about this’ and Holly and I thought, ‘This is a little bit strange that he doesn’t know about scallops’.”

Holly then chimed in: “I thought he was joking. Like, ‘Oh we’ve got a joker here’.”

Phil continued: “He’s actually the wrong interviewee, we’re talking to him about the Loch Ness Monster.”

After throwing his head back in laughter, Phil added: “‘Why doesn’t this man know anything about scallops?'”

He’s actually the wrong interviewee… why doesn’t this man know anything about scallops?

They had mixed the guest up with Scottish diver Guy Grieve. His hand-caught scallops featured on the programme, with TV chef James Martin turning them into a dish served with salt baked celeriac.

Phil and Holly had been speaking to Steve Feltham, a man who’s spent the last 30 years searching for Nessie.

Loch Ness hunter on This Morning

Asked if he had seen it himself, Steve said: “It’s a near sighting I had. Something going against the waves like a torpedo going through the water, just a spray of water off this object. That was in the first year of me being here full time, 29 years ago. And I thought, ‘Well this job’s going to be really easy’.

“I thought, ‘This job’s going to be really easy, if I see it once in the first year, I’m going to see it in the second and third year’. I’m still waiting for the second sighting.”

Asked what the monster could be, Steve said: “The jury’s still out. It’s not one of these long-necked dinosaurs… there’s not, we would see those. The most likely candidates are extremely big fish. But that doesn’t mean it’s an explanation. Some people believe there’s a spaceship on the bottom of this loch.”