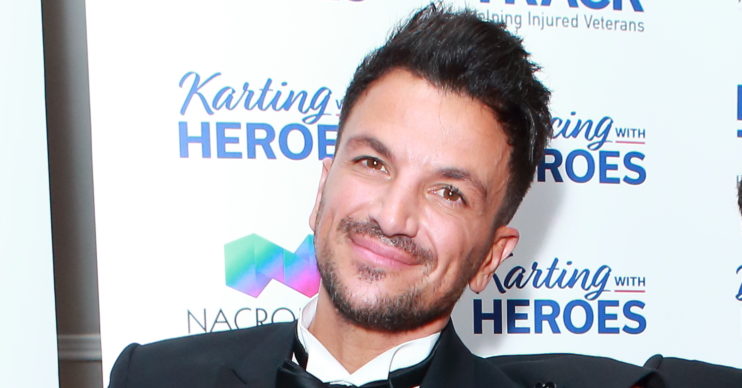 The tot wandered into shot while Pete was on Loose Women…

Singer Peter Andre has admitted he’s “in the dog house” with wife Emily after accidentally showing their son Theo’s face on live TV.

Pete was being interviewed live on Loose Women when three-year-old Theo wandered into shot and climbed up on to his dad’s lap for a cuddle.

Turning briefly to the camera, viewers saw Theo’s full face before the youngster jumped down and toddled off again.

Until now, glimpses of the tot’s face have been something of a rarity.

Protective mum Emily wants to keep the identities of Theo and his big sister Amelia, six, private – despite Pete’s other kids being in the limelight.

Junior, 14, and Princess, 12 – his children with ex-wife Katie Price – are TV and magazine regulars, but Emily is famously fiercely protective of her young family.

Taking to Instagram, Pete wrote alongside a screen grab of the moment: “I’m sooo in the dog house. Hey accidents happen we are in lockdown… @loosewomen @itv.”

Pete’s followers were naturally on his side.

“You could see how much you were trying to not have his face shown. And the worry in your face. I was thinking Emily is not going to be happy. Like you say, accidents happen. He’s beautiful, just like the others,” one follower said.

Another commented: “You should have just got up and carried him out. Stuff Loose Women, they would have understood, they are fab.”

“I was shouting: ‘Theo don’t turn around’ when you came on,” a third told Pete.

Junior and Princess later made an appearance on the show, with Pete admitted he was ‘petrified’ what Princess was going to say about his home-schooling abilities.

When the kids were asked how Pete has been in lockdown by host Ruth Langsford, Pete said: “Before you tell them, do you want that PlayStation?”

Pete then interrupted with: “Yeah I am good, thanks. It was lovely seeing you my darling why don’t you go and make yourself a nice sandwich.”

Emily on the frontline

Pete has been staying at home and looking after the children while Emily, who is a doctor for the NHS, is at work.

He recently commented that Emily is “dodging bullets” working on the frontline, adding that looking after the home and children is “nothing compared to what Emily is doing”.

He said: “She deserves so much more than just a home-cooked meal, but that’s the one thing I can contribute, that and looking after the kids.”