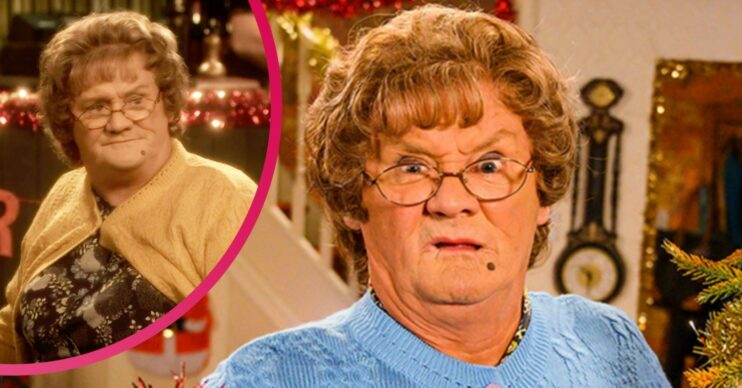 The Irish series – created by, written by and starring Brendan O’Carroll – last appeared on TV over Halloween.

That special reportedly pulled in the show’s lowest ever ratings for the BBC.

And it seems, based on last year’s offering, popularity is still on the wane…

What did viewers say about Mrs Brown’s Boys Christmas 2021 special?

Well, judging by Twitter, viewers found it about as funny as a dose of Omicron on Christmas Day…

One wrote: “If you find Mrs Brown‘s Boys amusing then I genuinely worry about you.”

Another commented: “Mrs Brown’s Boys and other reasons why you wish TV had never been invented.”

A third japed: “Why would anyone watch Mrs Brown‘s Boys when there are forks you could shove in your eyes?”

However, there were defenders with one stating: “I love Mrs Brown she always makes me laugh. She is wonderful and so down to earth.”

And another posted: “Ok, so am I REALLY the only one on here who loves Mrs Brown’s Boys? Apparently the most watched Christmas TV.”

What happened in the Mrs Brown’s Boys Christmas 2021 special?

However, she was under strict instructions from Father McBride concerning singing and dancing – there couldn’t be any.

Also scheduled to be shown on BBC One, it will air slightly earlier at 10pm.

It follows the first episode of Jamie Dornan thriller The Tourist.

This episode is titled ‘Mammy’s Mickey’.

Mickey, an unexpected visitor for Grandad, causes suspicion when he asks for cash to in a South African gold mine.

Star Brendan recently explained during an appearance on This Morning:

“They all thought Mickey was in prison for life, he’s a conman.

They all thought Mickey was in prison for life.

“But he gets out of prison and he’s coming over from Liverpool to see Grandad.”

Meanwhile Winnie is on a daredevil mission to change her life and Mrs Brown’s boys have a heart to heart.

What is the future for Mrs Brown’s Boys?

However, according to reports, the 2019 instalment was watched by 7 million and 3.7 million tuned in in 2o20.

And however the 2021 episodes perform, it seems Mrs Brown’s Boys will continue to air over Christmas for a few years yet.

Brendan previously reflected on a commitment to make the show until 2026: “I will be able to grow into the part. We also have a clause in which guarantees Mrs Brown is aired at 10pm on Christmas night, or else we don’t have to make it.”

Mrs Brown’s Boys Christmas Day special is now available on BBC iPlayer. A second special episode is on BBC One on New Year’s Day 2022 at 10pm.