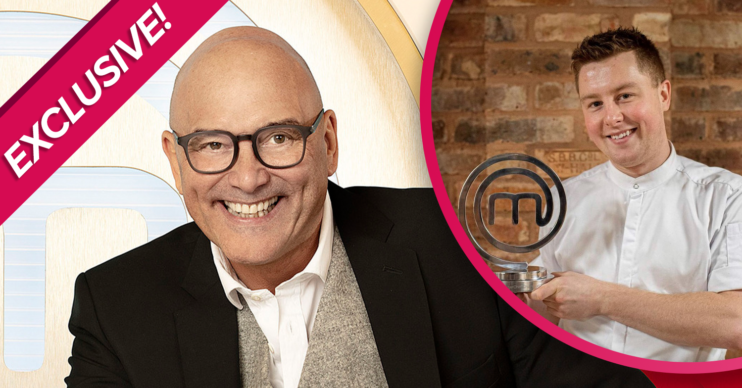 You have to be 'flawless' to get to 'their level'

MasterChef: The Professionals winner Alex Webb has revealed what Gregg Wallace is really like behind the scenes of the BBC show.

Away from the cameras, Alex told Entertainment Daily Gregg is “brilliant”.

However, he did admit to a recent “snub” from the MasterChef judge – and a bit of a telling off behind the scenes.

What did Alex Webb say about MasterChef star Gregg Wallace?

Alex, who has just teamed up with Coffee Friend, Told ED!: “Gregg is brilliant behind the scenes.

“He’d always turn up to the set, even if it was about 7am, with all the windows down and loud music blaring out of his car.

“And I always wondered why, even though there were ample car parking spots for him to park in, he would leave his car half in the space and half on the pavement, still with the music booming out.

“He certainly knows how to make an entrance,” Alex chuckled.

“But he was amazing to work with on the show – off camera, he’s so funny and also incredibly supportive.”

And, he said, Gregg was always on hand to calm his nerves by “cracking a silly joke and making me feel at ease”.

However, he did admit to a bit of a telling off from the MasterChef favourite.

“The judges were also critical too.

“I remember struggling with Asian flavours and the judges took me aside and told me in plain terms what I need to work on in terms of flavour and depth.”

Alex added: “It was tough to hear and to take, but it made me realise how flawless you have to be to get to their level when you are out of your comfort zone.”

How has Gregg Wallace lost weight while judging MasterChef?

Gregg has been showing off his six-pack on social media of late, but just how has he managed to shift the pounds with all that gourmet food he has to try?

Alex let ED! in on a little secret.

“To be honest, the judges don’t really eat that much of the plates we present to them – maybe no more than a small mouthful every time.

Read more: What is the prize for winning MasterChef?

“So while I know Gregg has lost a lot of weight, it wasn’t from my cooking!

“Although sometimes I would get to set early and he would be just finishing his long run around the canals in East London near the studio kitchen,” he said.

Are Alex and Gregg still in touch?

It would seem Gregg’s a little too busy to give Alex much of his time or attention post-show.

Alex said that he recently reached out to Gregg but received a bit of a snub.

Alex revealed: “I text Gregg occasionally, but sadly he just declined an invitation to do an Instagram Live with me – he’s still a very busy man!”

What advice would he give to the winner of this series of MasterChef?

Alex said winning MasterChef: The Professionals last year has been a little “overwhelming” at times.

“It can be overwhelming,” he said.

“So my advice to the next MasterChef winner is to keep grounded, surround yourself with good people who can advise you on your next steps, as it’s an unknown world you are stepping into.”