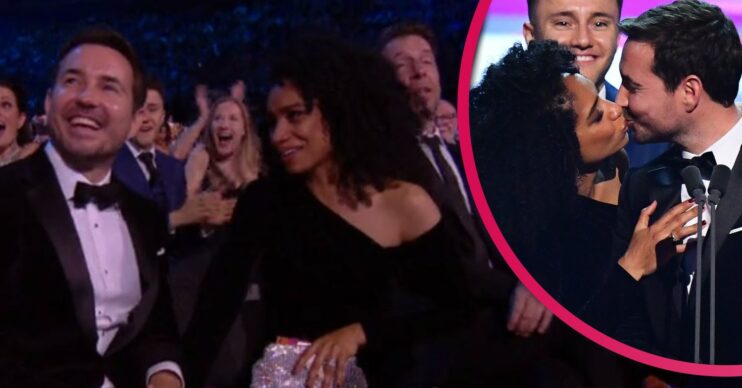 Some fans were melting at how much in love they are!

Martin Compston and his wife Tianna Chanel Flynn were cheekily told to “get a room” after packing on the PDA at the National Television Awards last night.

And as the couple celebrated the success, they couldn’t keep their hands off each other..

Martin Compston and wife at NTAs

As Line of Duty first bagged the Returning Drama gong, Martin and Tianna shared a kiss.

And Tianna was every inch the proud wife as she filmed the win on her phone.

Later in the show, Line of Duty won once again and this time it was for the Special Recognition Award.

Vigil star Martin and Tianna looked thrilled as they shared another kiss and embrace.

This time, Tianna joined the Line of Duty cast on stage and the PDA didn’t stop there.

Martin and his wife are at it again, get a room!

She was left in tears as Martin gave a thank you speech.

Meanwhile, over on Instagram, Martin shared a photo of himself and Tianna kissing while holding the awards.

Viewers took to Twitter to jokingly tell the couple to “get a room”.

One person said: “Martin and his wife need to get a room!”

Another wrote: “Martin and his wife are at it again, get a room!”

A third commented: “Can Martin and his wife, get a room #NTAs FFS.”

However, others gushed over their affectionate relationship.

One tweeted: “Totally here for @martin_compston and his wife being obsessed with each other #NTAs.”

Another said: “Martin Compston is obsessed with his wife and I LOVE IT.”

When did Martin and Tianna get married?

Martin and Tianna got married in 2016 after meeting at the Hudson hotel in LA, where she was a nightclub manager at the time.

Read more: Vigil viewers’ reactions to THAT Martin Compston incident have made our Bank Holiday Monday

The couple have one child together.