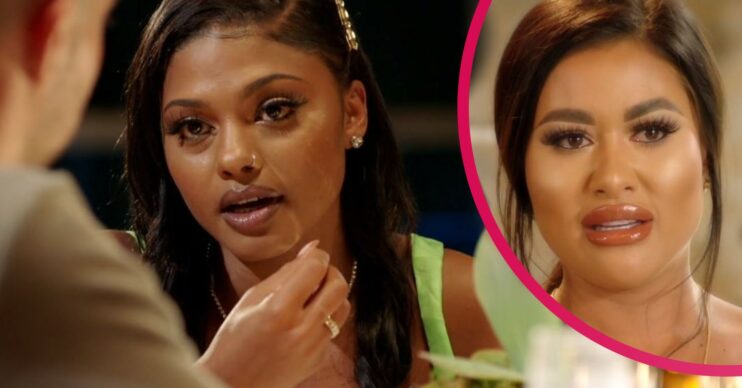 Alexis and Ant appeared to hit it off last night

MAFS UK viewers have expressed concerns for Alexis after she appeared to ‘flirt’ with Ant following Nikita’s meltdown last night.

During Wednesday’s episode, Nikita walked out of the dinner party after clashing with Jordon over his treatment of her friend Alexis.

However, after Nikita left, her husband Ant was seen having a conversation with Jordon’s wife Alexis and the pair seemed to hit it off.

During the dinner party, Nikita called out Jordon after Alexis had told her their honeymoon didn’t go well.

Alexis and Jordon also told the dinner table that they had established they were just going to be ‘friends’.

Read more: MAFS UK: Eight other most scandalous reality TV boot-offs as Nikita is kicked off the show

However, things erupted into a row as Nikita said she ‘hated’ Jordon before walking out saying she was leaving the show.

Ant didn’t go after her and instead stayed at the dinner, telling the rest of the couples: “You see what I’m dealing with now, it’s insanity!”

Ant and Nikita had previously clashed on their honeymoon, with her telling him to wax his eyebrows and “get a sunbed”.

Later at the dinner party, Ant and Alexis got to know each other and sparks seemed to fly.

Alexis told Ant about her honeymoon with Jordon: “I got constantly rejected. For a female, that’s just so demeaning.

“So at this point, romantically dead. He’s not my usual type.”

Ant then asked: “What is your type? Green eyes?” as Alexis burst into laughter.

Alexis admitted: “This is the most I have laughed!”

She told the camera: “You can’t deny that he’s very handsome. He’s got the sexy eyes.”

Alexis then told Ant: “I go for vibes, whoever I vibe with and have a connection with.”

Ant then asked: “Are you vibing?” to which Alexis joked: “[Bleep] off, have you got your sexy eyes on?”

Alexis added to cameras: “There was no love waves in the Maldives, but I may have just found them in the bloody UK.”

However, in a preview for tonight episode (September 9), Nikita makes a return to the show for the first commitment ceremony.

A tearful Nikita says: “I’ve got a heart and I’ve got feelings.”

She also said on Instagram in a post last night: “Nobody knows what goes on behind closed doors, this dinner party took around 12 hours to film, it was a hectic day, nobody got to see the real deal.

“I’ll always have my girls backs even if it’s not reciprocated unfortunately. A lot of us created close bonds off camera. See the bigger picture people.”

What did MAFS viewers say?

One person said: “Alexis, Nikita will rip your insides out through your eyes…”

Another wrote: “Alexis don’t go for Ant during the show, Nikita will hunt you down.”

A third added: “When she finds out, Nikita will HIT. THE. ROOF!”

Read more: Married At First Sight UK: ‘ALL of the couples are disastrous pairings – yes, even Adam and Tayah!’

One tweeted: “I admire Nikita for defending Alexis.”

Another said to Nikita: “Actually shocking how you stood up for her and she threw it in your face.”