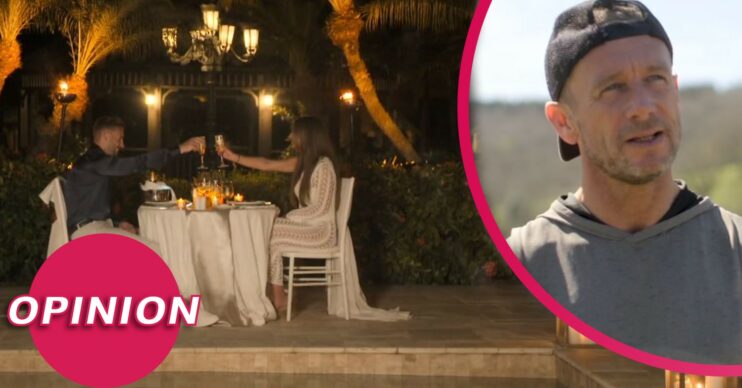 Married At First Sight UK: ‘ALL of the couples are disastrous pairings – yes, even Adam and Tayah!’

Many of the couples don't seem compatible...

Are we glued to Married At First Sight UK? Hell, yes! But let’s be clear why, it’s because the couples are so disastrously matched. All of them… yes ALL.

You may be thinking this is unfair and are backing at least one or two Married At First Sight UK couples to make it, but let’s forensically examine what’s going on.

Adam and Tayah seem to be progressing the most out of all the Married At First Sight UK couples.

The couple may have dropped the L bomb after less than a week together, but let’s not get carried away.

First off, the guy has NEVER had a relationship and previously said he’s never had time to find a partner after dividing his time between work and the gym.

It seems these two are going full steam ahead but, mark our cynical words, cracks will start to appear in their romance quicker than on a plate at a Greek wedding when the novelty and fairytale idea of a relationship begins to fade!

Franky and Marilyse may seem to be getting along so far but viewers are screaming ‘red flag’ at the TV.

Why, you ask? Well, first of all his wedding speech went down like a lead balloon.

It started off: “Ladies and gentleman, I will actually enjoy this speech because it’s highly likely again that I will get to speak for a whole ten minutes without my wife interrupting me.”

He then added: “Thank you in advance that on our honeymoon you’ll get up every morning and make me breakfast. I like my eggs runny…”

The Poundshop James Bond – Twitter’s words, not ours – has also been accused of making “snide comments” towards his bride.

During last night’s episode, Franky discussed the couple taking on adventurous activities during their honeymoon and poked fun at her.

He said Marilyse, who has a fear of deep water: “You will have on a life preserver so when you fall in 300 times and when I’m laughing – I’m joking – you will float.”

A viewer tweeted: “Franky is giving me such red flags poking at Marilyse with snide comments saying ‘Oh I’m joking’ all the time I hate that so much there’s always a bit of truth in those comments.”

We’ll hunt you down in our camo gear if you don;t start treating her right, Franky boy.

Josh and Amy’s relationship has already hit the rocks and their honeymoon is turning into a disaster.

And it’s obvious they just don’t have enough chemistry.

While Josh seems very chilled and not that affectionate, Amy, who has a much bigger (read: interesting) personality has been accused of him for being needy.

Because she wanted a cuddle with her new husband to try and build some connection.

She previously said she would like someone her age (34) and it seems that her concerns about him being 26 are justifiable.

Luke and Morag’s honeymoon was shown on screens last week and they were yet another couple who struggled to hit it off.

Morag came under fire by viewers for criticising Luke’s appearance, saying she wanted more of a “man than a boy” and hinted she wanted somebody with a “gym bod”.

Poor Luke just said he wanted “someone to like me for who I am”.

But it’s not just attraction (or lack thereof) which is an issue. Luke previously said he would like to have kids, but Morag said she doesn’t want them.

A deal breaker, no arguments. And surely the top questions the experts should have vetted them on before deciding to match them?

Now these two sparked A LOT of reaction last night and it’s clear to see they aren’t a match made in heaven.

Jordon is so obviously – and rudely – not into Alexis and even told the cameras that he’s looking forward to meeting the other girls later in the series. Wife swapping is definitely on his agenda.

He has repeatedly reminded her his usual type is blonde hair and blue eyes, so the attraction is clearly not there between these two. And the personalities are so opposite it’s hard to see what foundation they could have.

Then, there is the small matter of the reports that Jordon split from his girlfriend of 11 years before appearing on the show.

Let’s just say, he isn’t exactly in viewers’ good books at the moment.

One person tweeted: “Alexis wants to meet in the middle but Jordan doesn’t. Jordan thinking about the girlfriend he left for a free holiday and TV. Embarrassment.”

Nikita and Ant probably were an early contender for the series’ worst couples and didn’t get on from the word go.

She came under fire for her remarks about Ant’s appearance, saying he needed to wax his eyebrows and “get a sunbed”.

Nikita was slammed on Twitter, with viewers calling her “rude” and saying she ‘didn’t deserve’ Ant.

It was obvious to see they were completely different personalities and, while some opposites attract, these two clearly never had a hope.

In fact, Nikita has been booted off the programme for ‘breaching code of conduct’ following a foulmouthed outburst at her fellow co-stars.

Her last appearance will be on tomorrow night’s show – perhaps Ant could find consolation in Alexis!

Dan, 27, and Matt, 39, may not be an out and out disastrous couple, but let’s not underestimate the potential impact of their differences in lifestyle.

The couple instantly hit it off when they met at their wedding despite their age gap.

However, during their honeymoon to Mexico, Dan spoke about wanting to live by the sea while Matt didn’t seem keen on moving away from his family.

That said, we really hope these two will last – this show needs at least one happy ending or a new series has no legs, certainly not as a credible dating show.

Again, Megan and Bob were another match who didn’t seem completely awful.

However, during their honeymoon in the Dominican Republic, Meghan told Bob she needed some space after feeling “claustrophobic”.

Read more: MAFS UK: Eight other most scandalous reality TV boot-offs as Nikita is kicked off the show

She told him: “I think for me it’s really really important that we take a step back from the romantic side. I’m just feeling a bit claustrophobic with it.”

Bob later told cameras that Megan’s comments were a “spanner in the works”.

Introvert meets extrovert… can that ever work? We’re talking different needs from each other, from other people and from life itself. Huge obstacles to overcome.

Married at First Sight UK airs Monday – Thursday nights at 9pm on E4. Catch up on the series so far on All 4.

What do you think of the Married at First Sight UK couples? Leave us a comment on our Facebook page @EntertainmentDailyFix and let us know.