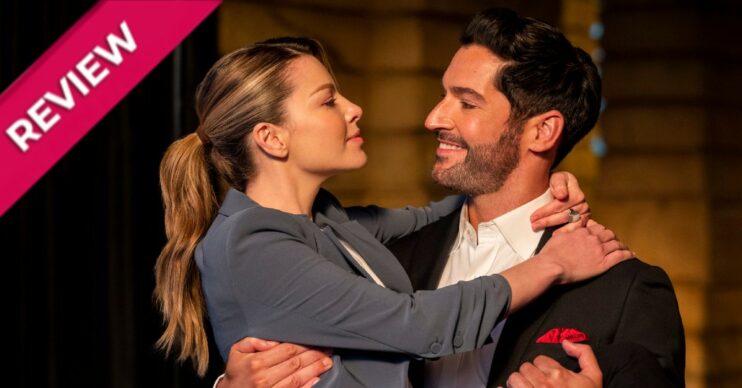 Tom Ellis and Lauren German’s Lucifer and Chloe Decker are finally getting their big goodbye in Lucifer’s final season.

Picking up from season five’s God-given ending, Lucifer is now preparing to leave LA for a new life in the sky as God.

Only, he’s not ready to go quite yet.

Thankfully, the arrival of a mysterious angel with razor wings, Aurora, arrives. You can’t really leave her running loose now, can you?

With one last mission, the detective partners head off to figure out who she is and what she wants. Turns out, it’s to kill Lucifer. Bummer.

Then there’s the rest of the gang – Dan (Kevin Alejandro) is currently stuck in hell. Amenadiel (DB Woodside) is trying to find his purpose, Linda (Rachael Harris) is still balancing work and being a mum, and Ella (Aimee Garcia) is still struggling with her faith, unaware she’s literally surrounded by celestials.

Trixie (Scarlett Estevez) is also struggling with the death of her dad. But she’s somewhat palmed off to ‘science camp’ to explain her absence for most of the season while her mum spends all her time with Lucifer.

At least Maze (Lesley-Ann Brandt) and Eve (Inbar Lavi) are in a happy place. For now anyway.

But with the clock ticking on Lucifer’s ascension to the Silver City, things all come to a head quickly enough.

This finale is a long-time coming, and with such a quick change of heart by Netflix to add a sixth season, the team had their work cut out for them to make it all count.

Thankfully, if you’re a fan, they did. In fact, season six is arguably stronger in voice and tone than season five was.

It’s also completely rammed with delightful moments for the fans. This is a love letter to them, if anything. Nothing feels too forced in, instead offering an opportunity to bring things full circle in a satisfying way.

It’s not entirely clear why Lucifer’s final season feels so scaled back. But it’s not the worst thing. In fact, its heart really shines in these last episodes. And that’s what made so many people fall for the character in the first place.

Yes, there are some moments that are pretty unnecessary, but in a way this whole season is. It also doesn’t matter. It’s enjoyable – roll with it.

Is Lucifer’s final season worth the watch?

Tom Ellis and co give a sweet and sentimental goodbye to the Devil-done-good in Lucifer’s final season. It’s sure to leave fans more than happy.

It’s got more than a few fan service moments – including an all-singing, all-dancing moment with Drag Race’s Bob The Drag Queen and some long-awaited plot points finally playing out.

Read more: Netflix in September 2021: Everything arriving from Lucifer to Sex Education

But it also has a hell of a lot of payoff for those fighting for the series so long. The Save Lucifer campaign, the season six fight – it wasn’t done for nothing.

However, more than anything, it fully draws a line under the show and what it was, tying nearly everything up in a sweet bow. Which at this point is all anyone really wants.

Adios, Lucifer. You’ve been cheesy and melodramatic but you’ve been fun.