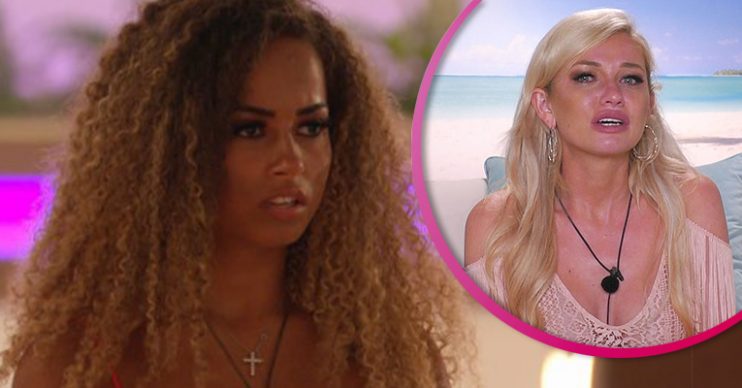 Both have proved hits on the panel talk show

It looks like Love Island stars Amy Hart and Amber Gill are set to go head to head in a bid to be regular Loose Women guest panellists.

Both have appeared on the popular talk show, and proven a hit with viewers, but it looks like Love Island winner Amber is already in the lead to secure a more permanent spot.

Although Amy appeared a few weeks ago, and went down well with viewers, she reportedly has yet to receive an official invite back to the popular ITV talk show.

Whereas Amber formally confirmed just this week that she has signed up to become a regular guest panellist.

She told The Mirror that she won’t be holding back in dishing out her honest opinions.

“Trust me, I’ll be giving my opinions on everything from cosmetic surgery to open relationships and blended families,” Amber told the paper.

Read more: Maura Higgins praised for her This Morning debut

A source also told The Mirror that Amber proved so popular on the show, ITV producers were reportedly desperate to get her back on.

“Her appearance was a real hit and viewers loved her, so it’s well worth giving her a shot at asking the questions. ‘If she’s a success, a regular slot on the panel in the future could be on the cards,” the source said.

Amber’s good news obviously could spell bad news for Amy, as it’s unlikely there is room for two Love Island stars at the Loose Women table.

Read more: Amber Gill ‘signs up for Dancing on Ice’

Love Islander runner-up, Maura Higgins, has landed herself a regular ITV job however.

The outspoken star has signed up to be This Morning’s Agony Aunt.

Debuting last week, she appeared at complete ease on the infamous daytime television sofa, and she won praise for her direct but wise words from the viewers at home.

As for her Love Island partner Curtis Pritchard, he will reportedly be joining BBC’s The Greatest Dancer as the dance competition’s onscreen receptionist.

Ent Daily has contacted a rep for Loose Women for comment.

Who do you think makes a better Loose Women panellist? Amy or Amber? Tell us what you think on our Facebook page @EntertainmentDailyFix.