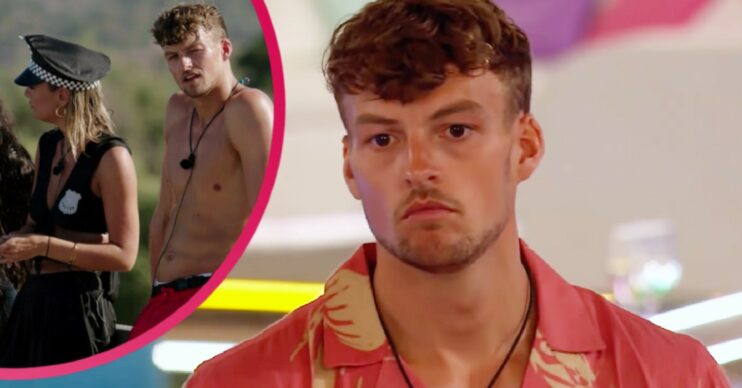 Love Island: Hugo leaves fans ‘heartbroken’ as they ‘complain to Ofcom’ over challenge

The teacher wasn't chosen in the Line of Booty challenge

Love Island viewers were left ‘heartbroken’ as Hugo was brutally snubbed in the Line of Booty challenge.

The lovable teacher is yet to find love on the ITV2 dating series, despite being a firm favourite with fans.

And viewers were fuming after the Islanders chose not to kiss Hugo during last night’s game (July 9).

What happened to Hugo?

On Thursday, viewers watched on as the Islanders took part in the show’s Line of Booty game.

The Love Island challenge involved the girls dressing up as police officers, before choosing a boy to interrogate.

Despite being coupled up with Hugo, Chloe shared her first snog with Toby.

Hugo was the only boy not to be picked, meaning he was left standing by himself.

Following the game, he admitted: “Not humiliating at all.”

And the brutal moment didn’t go unnoticed with viewers at home.

One wrote: “My heart literally broke watching Hugo in that challenge, not nice to watch #LoveIsland.”

A second complained: “Are none of these girls even friends with Hugo??? Imagine them leaving him out of the challenge like that.”

My heart literally broke watching Hugo in that challenge

Another added: “My heart broke all over the place for Hugo in that challenge.”

A fourth tweeted: “What happened to Hugo during that police challenge was brutal man.”

Meanwhile, others threatened to complain to Ofcom over the scene.

Calling Ofcom for this treatment of Hugo #LoveIsland

Hugo left out again. I am writing to Ofcom #LoveIsland

One said: “Me writing my Ofcom complaint about Hugo not being picked #LoveIsland.”

Another added: “Put a 10/10 in Casa Amor for Hugo or Ofcom will be hearing from me @LoveIsland.”

A third shared: “Legit feel like writing a letter of complaint to Love Island and Ofcom about poor Hugo #LoveIsland #Hugo #GetHimAMissus.”

A fourth tweeted: “Should complain to Ofcom for showing Hugo standing there in that challenge unpicked. My heart.”

A fifth shared: “I’m calling Ofcom why did they do that to Hugo? #LoveIsland.”

On Wednesday, Faye labelled the teacher “cringey” ahead of his dates with the new bombshells.

She said: “Hugo’s got to make out that he’s not cringey.”

However, one viewer hit back: “Faye is actually a proper nasty piece of work, saying Hugo is going have to make out like he’s not cringey on his date. You’re the most cringe in there love. Get her out.”