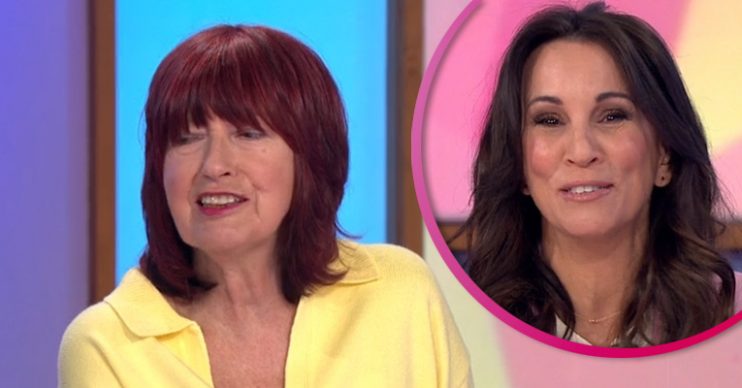 The panel were discussing “noisy eaters” in the cinema and Andrea admitted she likes to eat while watching a movie.

She said: “Half the fun at the cinema is that you [pick up food] and wait for a noisy bit [of the film] and then you eat it.”

Janet said: “It’s so common to eat at the cinema and at the theatre.”

Andrea told her: “That’s the nicest thing you’ve ever said to me,” to which Janet blurted out: “You’re a [expletive].”

If you didn’t catch it, Janet said a word that begins with the letter ‘s’ and rhymes with ‘shut’.

Coleen Nolan exclaimed: “Finally! I’ve been waiting for this moment. You should be proud of being called that, I would be! I’m trying to be!”

The presenter later apologised to viewers over Janet’s naughty slip of the tongue.

She said: “I have to apologise to anyone who may have been offended by the use of a certain word by Miss Janet Street Porter.”

Andrea then added: “I couldn’t apologise for it because I don’t even know what was said.”

Viewers were in hysterics over Janet’s outburst and shared their thoughts on Twitter.

Another wrote: “Has Janet actually just called Andrea a [bleep]?!?” while a third tweeted: “I had to jump on the hashtag when I heard Janet Street Porter calling Andrea a [bleep].

“I wasn’t at all disappointed… it was so unexpected and hilarious. Clearly a joke about her ‘dirty’ habit of eating in cinema, clearly a classic JSP moment.”

Earlier in the segment, Janet spoke about noisy eaters in the cinema.

She said: “I went to the National Theatre a few months ago and posh people sit down with their big box of chocolates, they open the box and then open each individual chocolate all through the first half.”