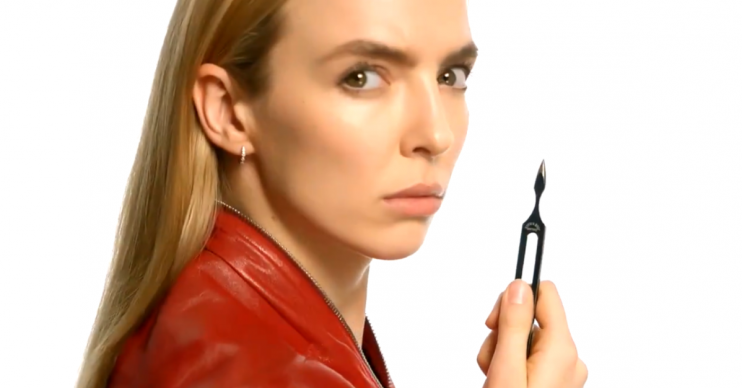 The spy drama returns for a third series from April

Show bosses have unveiled a dramatic teaser trailer that reveals the third series of the show will arrive on BBC America on April 26, and fans are counting the minutes.

The brief clip shows Villanelle (Jodie Comer) tapping what appears to be some sort of scalpel against her lips before turning to the camera with a menacing stare.

MI6 agent Eve (Sandra Oh) then appears, with the pair both clad in blood-red dresses that billow around them in the breeze.

The camera then flashes between the pair in their gowns, with Eve dressed in her usual attire and looking perplexed.

There have already been a couple of sneak peeks at the new series of the acclaimed spy drama.

The first trailer dropped on Valentine’s Day and simply showed the words “Happy V Day”, with a drop of blood trickling ominously down the V.

And pictures from the set have shown Villanelle dressed as a rather sinister looking clown and Eve looking as if she has swapped spying for a job in a restaurant.

You deserve this. xx #KillingEve pic.twitter.com/UEM4xYbaNi

The tense finale of season two saw Eve left for dead after a showdown with the vicious killer.

While the fact she lived is not the best kept secret in television, viewers are keen to find out how she survived and got away from Villanelle.

“I can’t wait any longer!!!” posted one excited fan on Twitter, while another tweeted: “Stoked for this!!!”

Read more: All you need to know about Killing Eve

Killing Eve, which is based on the Villanelle novels by author Luke Jennings, started in 2018 and returned with its second series in 2019.

The show has been a ratings hit and has racked up a raft of accolades, picking up gongs at the Baftas and Golden Globes.

A fourth series has already been commissioned.

Are you excited about the return of Killing Eve? Leave us a comment on our Facebook page @EntertainmentDailyFix and let us know!