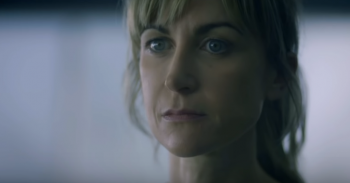 The first episode had a number of raunchy scenes but one in particular left viewers gobsmacked.

We saw Katherine’s character, university lecturer Dr Leah Dale, touching herself intimately while fantasising about an attractive male colleague in one of the university’s toilet cubicles.

Leah is unhappy in her relationship with husband Adam, who is played by Mr Selfridge actor Tom Goodman-Hill, and there was an awkward scene that showed them trying for a baby.

But we also learned that Leah has a crush on one of her workmates.

They were shown snogging in the university toilets, but it turned out to be a fantasy of Leah’s while she pleasured herself.

Someone then washed their hands at a sink, interrupting Leah, and the situation got tense as their trainers became visible under the cubicle door.

Viewers on Twitter were shocked by the sexy scenes, which show Katherine in a different light to her Corrie character, Becky McDonald, whom she portrayed between 2006 and 2012.

One wrote: “Thought this would be some good dramatic viewing for me and my mum and 5 mins in someone’s [bleeping] in the loos, ideal #Cheat.”

Another tweeted: “Watching #cheat on @ITV few minutes in, two sex scenes, sitting next to me my 12 yr old. Christ where do I look. ermmm maybe son you should go on ya Xbox #cheekylady.”

A third chimed in: “No matter how old I am, sex scenes will always make me feel awkward.”

Others weren’t impressed with the show’s sexual scenes.

Someone commented: “I managed six minutes of #Cheat before the sexual scene. Boring! Why does every drama have to have unnecessary sex scenes? I’m guessing because the drama isn’t that good. Such a turn off @ITV.”

The story of Cheat sees Leah handed a suspiciously good essay by one of her final-year students, Rose Vaughan (Molly Windsor).

She accuses her of cheating and, affronted by the challenge, Rose gets back with a series of increasingly intimidating and sinister gestures.

Things got really dark in the first episode when a flash-forward revealed that Leah’s husband has been killed – and both Leah and Rose are suspects.

What were your thoughts on Cheat’s opening episode? Leave us a comment on our Facebook page @EntertainmentDailyFix and let us know what you think of this story.