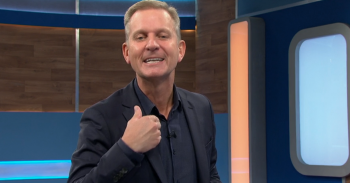 'Wtf is that tan about?' asked one bemused viewer

It is usually the guests on The Jeremy Kyle Show that are brutally mocked for their appearance by merciless viewers on social media.

But during this morning’s episode of the unruly ITV talk show it was a member of the audience who became the target of uncompromising online critics.

Singling out a woman seated in the studio, several Twitter users took aim at her striking tan.

Their reactions ranged from ‘alarmed’ to ‘savage’ – but there was no doubt the spectator’s memorable appearance proved the highlight of the show for many of those watching at home.

Read more: Emmerdale fans predict Chas will be the surrogate mum for Aaron and Robert

“What’s all this about!???” tweeted one hysterical viewer.

One harsh commenter joked: “I think she might need a bath.”

“That foundation’s a tad too dark I think, love,” chuckled another fan.

Day off and to #JeremyKyle where the audience is more hilarious that the guests…that foundations a tad too dark I think luv 👩🏿‍🦳😂 pic.twitter.com/HNLGvDNjxR

Elsewhere on the show, both the studio audience and viewers were left gasping after Jeremy unveiled ‘sickening’ x-rated messages sent from one love rival to another.

The host spluttered as he tried to read the shocking texts aloud – and many of those watching made it clear they didn’t want to hear any more.

Another queasy watcher added: “I’m just going to rush to the bog to puke.”