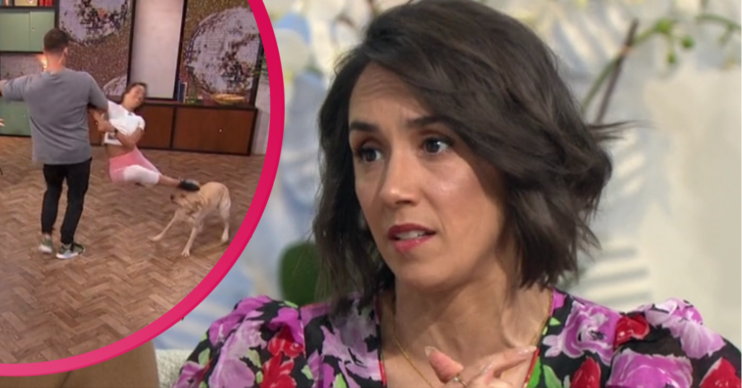 Janette Manrara has apologised on Instagram after Morning Live viewers were left concerned when she accidentally kicked a dog in the face.

The Strictly Come Dancing star appeared on the BBC One show today, but viewers were worried about Dolly the dog.

Afterwards, professional dancer Janette, 38, shared a photo on Instagram Stories of her and Dolly, and she seemed gutted.

She wrote: “This photo was taken after my sincere apologies to Dolly! She stepped into Aljaž and I doing our little lift at the end of the show.

“Her excitement to join in was high! She is completely okay and we cuddled and kissed and made up.”

She is completely okay and we cuddled and kissed and made up.

The accident happened after husband and fellow dancer Aljaž Škorjanec spun Janette around the floor.

But after host Gethin Jones wrapped up the episode, Dolly the dog came to see what the fuss was about, moving closer to the dancers.

After a few seconds, Dolly got a bit too close and Janette kicked her right in the nose.

Although it was over within a split second, viewers at home had already clocked the kick and they took to Twitter to ask if Dolly was alright.

I hope that dogs ok! Just got smacked in the face by a dancer 🙁 #MorningLive

Ermmm I swear the dog on #MorningLive just held a boot to the face. Poor thing

Another wrote: “Ermmm I swear the dog on #MorningLive just held a boot to the face. Poor thing.”

The tweet said: “Dolly was checked over by Dr James and was completely fine, she won’t be let off the lead for Strictly Fitness again though.”