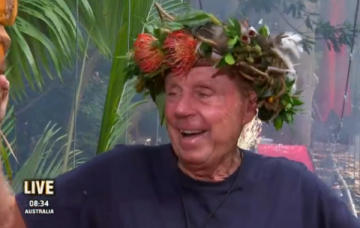 The ex-football star recorded the moment his father was crowned king of the jungle as the family watched on a giant home cinema screen.

Jamie posted a series of videos on Instagram of 71-year-old Harry’s grandkids jumping for joy as Declan Donnelly named him the series winner.

I never thought I’d say this but I’m so proud to have my dad as the king of the jungle. We love you! Now come home please, we all miss you!!

The Sky Sports football pundit, who has two sons, Charley, 13, and Beau, nine, with ex-wife and former pop star Louise Redknapp, wrote: “I never thought I’d say this but I’m so proud to have my dad as the king of the jungle.

“We love you! Now come home please, we all miss you!!”

Then, as ITV showed his dad walking triumphantly across the bridge, he added: “Go on, H. Go and see Mum. You know it makes sense.

“Go on, Dad. King of the jungle, who’d have thought it?

“Look at him! Go on Dad. He doesn’t know what he’s holding up there! Go on, Harry! Well done.”

Speaking later on the phone to Australia on ITV2 spin-off show I’m A Celebrity… Extra Camp, Jamie said: “I just want to thank the campmates for looking after him, they were so kind to him.

“And special thanks to John (Barrowman) who I’ve met before. All the boys, all the kids, we’re so proud of you, mate.”

Ex-football manager Harry is believed to be planning a book about his time in the series. He said before entering the jungle that he had never watched a single episode of the show.

I’m A Celebrity… Get Me Out Of Here! is available on ITV Hub catch-up.

Are you pleased Harry won? Leave us a comment on our Facebook page @EntertainmentDailyFix and let us know what you think!