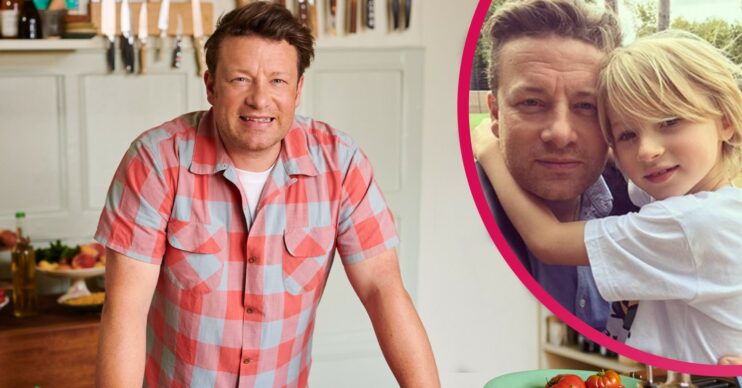 Jamie Oliver children: What are all their names and ages?

He and wife Jools boast a merry brood

Jamie Oliver and wife Jools have five children together, but what are their names and ages?

Here’s everything you need to know about the cook formerly known as The Naked Chef, as he returns to Channel 4 with new series The Great Cookbook Challenge with Jamie Oliver.

Read more: Jimmy Doherty on the impact of coronavirus, pleasuring turkeys and his Jamie Oliver reunion

How many children does Jamie Oliver have? What are their names and ages?

Jamie Oliver has five children with his wife Jools Oliver.

Find out more below…

At the moment, she is in her first year of study at Bristol University.

Reports say she is studying Music and English among other subjects.

Jools has admitted that she’s struggled to adjust to life without her eldest child at home.

Earlier this year, the Olivers were not able to spend Poppy’s 19th birthday with her.

Jools has revealed that Poppy leaving home has enhanced her need for a sixth baby.

She said: “It is made much worse because Poppy is going to university and because I think, ‘Oh, there you are, there’s a room free’, I’m sure that’s a sign.

“Now I’ve got the older and the younger (groups of children) and I’ve got River, I think you know just one more, life’s all about pleasure that just gives me so much pleasure.”

Jamie’s second eldest daughter is the spitting image of her mum Jools.

She recently took her A’ Level exams and received the results in August.

At the time, Jamie wrote: “This little munchkin, my second daughter Daisy, gets her A’ Level results at 8.30am this morning.

“It’s going to be a real moment just like for many other parents and students out there!

“Good luck… Daisy whatever grades you get today, I’ll be proud of you.

Jamie has been vocal about his dyslexia and the fact that he did not attend university.

Jools has been forced to defend her choice of name after discovering Petal Blossom is the name of a My Little Pony.

She will begin studying for her GCSE’s in the next few years.

He is probably the most well known of the Oliver kids due to having his own cookery show called Cooking Buddies on YouTube.

Some of his most watched recipes include an omelette, spaghetti bolognaise and chicken fajitas.

Last year, Jools expressed her concerns as he reached an important milestone – starting at a private all-boys school.

She said: “He’s a funny little boy. He really loves girls, he doesn’t really like boys, as in playing with boys, and he’s going to an all-boys school which is a bit worrying.”

She added: “And he loves dressing up, he wears a dress every day, I’m not revealing anything, I just think he is the most different…

Jools went on to call him “theatrical” and “totally like a little girl”.

Meanwhile, Jamie has revealed that River was not a fan of the meals he served up during his hit lockdown TV series Keep Cooking and Carry On.

Speaking on The Chris Moyles Show on Radio X, Jamie said: “My youngest son River, who’s now five, was four at the time and he’s got such an amazing personality.

“But every time I cook food he tells me how disgusting it is.

“We had 16 hours to turn the show around every day.

“In the end, I was getting so much abuse from my four-year-old it nearly broke me twice.”

Jamie Oliver recently said his wife is “nuts” for wanting to have another child.

The TV chef and restauranteur says he is happy with his existing family and has no desire to expand.

He said: “Jools is literally nuts and she wants another one.

Tragically, Jools has suffered five miscarriage in total – three after welcoming River in 2016.

How long has Jamie been with Jools?

“We were due to renew our wedding vowels this summer but that can wait!

“Twenty years married but together 27 years my first true love.”

She referenced her heartbreaking experiences of miscarriage by saying: “We have created five wonderful children and lost our five little stars in the sky.

“Thank you for loving me the way you do. We did it, on to the next chapter.”

“We’ll do it completely differently. It sounds a bit cheesy, but 20 is an amazing milestone.

“It’s nice to have an excuse to get people together.”

Where does Jamie Oliver live?

Jamie and his family moved into Spains Hall during the summer of 2019.

The £6m property is located on a 70-acre estate and includes a six-bedroom farmhouse, three-bedroom lodge, swimming pool, tennis court and converted stables.

How old is Jamie Oliver?

He is currently 45 years old, one year younger than Jools, who is 46.

The chain had been struggling with debts of £71.5m and teetered on the edge of bankruptcy.

In May 2019, Jamie put all of his British restaurants into administration, a form of bankruptcy protection.

Jamie said at the time: “I’m devastated that our much-loved UK restaurants have gone into administration.

“I am deeply saddened by this outcome and would like to thank all of the people who have put their hearts and souls into this business over the years.”

His chain was the latest victim of a tough trading environment on the UK High Street.

Jamie Oliver and Gordon Ramsay feud: What’s it about?

Jamie and Gordon do not speak to each other.

The Naked Chef has publicly criticised Gordon’s swearing, while Gordon has revealed he will not speak to Jamie unless he apologises to his wife Tana.

Jamie is said to have upset Gordon’s wife Tana with his comments during an interview.

“To judge someone else’s family on the amount of kids you have, that’s…”

Jamie’s comments appeared to have hit hard as they came after what Ramsay describes as a “[bleep] year”, during which he and his wife Tana had lost a baby at five months through miscarriage.

He credits cooking for ‘saving him from dyslexia’.

The Great Cookbook Challenge with Jamie Oliver airs at 8pm on Monday, January 31, 2022 on Channel 4.

Did you know the names and ages of Jamie Oliver’s children? Leave us a comment on our Facebook page @EntertainmentDailyFix.