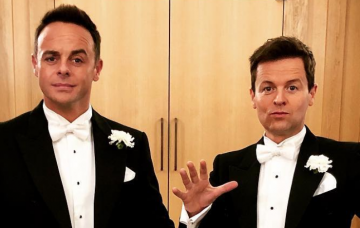 Ant and Dec recently returned to work on Britain's Got Talent

The popular series, hosted by Ant McPartlin and Declan Donnelly, will not air this year.

Ant, 43, stepped down from all TV presenting duties last year, including Saturday Night Takeaway, following his arrest for drink-driving.

Lygo, ITV’s director of television, said: “It will be back next year. It was the right decision, because with Ant, we didn’t want him working last year so it was, it wasn’t just a year off on air, it was a year off from work and getting himself straight.

Referencing the show’s last hiatus, when it was off air from 2010-2012, he said: “People were delighted when it came back, so I think a year off will actually hopefully refresh and help the show, so when it comes back, it’s a real, big moment. But that will be next year.”

The TV executive also said that a rumoured reunion of the hit TV series SMTV for its 20th anniversary last year was “never formally happening, it was an idea”.

He added that another series the duo had been working on, titled Ant and Dec’s DNA Journey, will air later this year in the autumn.

He said: “I think with DNA we had to stop filming, because they hadn’t quite finished it, but I have seen the first film, it’s two big films, and it’s brilliant and the two of them are fantastic together.”

The series will see the pair trace their heritage and meet “relatives they’ve never seen”.

Speaking of ITV’s other major programmes, Lygo said the X Factor was still a “really big show” for ITV, despite dwindling ratings.

The 15th series of the show was won by Dalton Harris, whose victory was watched by a peak audience of 7.5 million viewers, up from 500,000 the previous year, according to ITV.

Lygo said: “The audition shows do incredibly well, eight million (viewers) or something and then it does tail off a bit during the lives”.

He praised the show’s head judge, Simon Cowell, who he said “just generates this attention and heat in a good way. And I thought it was great to try Robbie (Williams) and you couldn’t, on paper, think of a bigger, better judge for a show like X Factor.

“So it’s not as if the producers and Simon aren’t trying everything to keep it refreshed and so forth.”

He said the show was in need of something to “make it leap again and that will be great if we could find that thing for X Factor”.