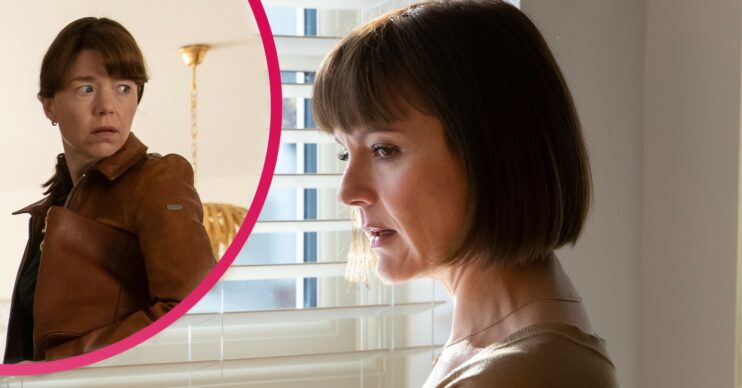 Hollington Drive: 4 things viewers claim were very wrong with the drama and its ending

What did you think of the series?

And while poor Alex Boyd’s killer was revealed, many viewers gave the whole series the thumbs down.

So what were their problems?

Hollington Drive ending: It was just so predictable

For a whodunit, Hollington Drive built up the suspects as it went along. As you would expect.

What about Eddie? Or as some thought, Helen’s husband David was in the frame.

But at the end, many thought that it was Helen. She had demonstrated a manipulative and controlling streak right from the very start.

And she also demonstrated a willingness to do anything to protect her daughter Eva.

So when she was revealed as Alex’s killer, no one was surprised.

“I blame myself for expecting something unexpected. this maybe the worst drama of the year, and my god, the acting, no one comes out of this well.”

Anna Maxwell Martin has been told to speak quietly so no one knows what she is saying! Also we don’t know what hell is happening either #hollingtondrive #speakup pic.twitter.com/W48OKKgGDt

The voices were just too mumbly

But throughout this whole series, many thought that Anna’s character Theresa more or less whispered her way through the four episodes.

Add in Helen’s husband David, who seemed to mumble his way throughout the breakdown of his marriage, and viewers weren’t impressed.

One viewer said on Twitter: “#HollingtonDrive should be renamed mumble street, as you can’t make out a word most of them say, it’s like watching paint dry, so bloody slow.”

Another lamented: “Anna Maxwell Martin has been told to speak quietly so no one knows what she is saying!

“Also we don’t know what hell is happening either #hollingtondrive #speakup.”

Where were the airbags in the car?

Aside from the actual reveal (which happened in flashback), the really big scene in last night’s finale was a car crash.

Helen knew her time was up and, as Theresa was quickly putting two and two together, the headmistress decided to end it all… and take her sister with her.

She swerved to hit a tree stump and the car spun and crashed. But they both survived, and viewers were flummoxed by one thing – there were no airbags.

One viewer asked on Twitter: “Audi won’t be very pleased the airbags did not work.”

Another asked the same question: “Audi don’t have any airbags in their cars then? [thinking-face emoji].”

Everything was just too unrealistic

The airbag question many were asking leads us onto this… everything seemed so unrealistic.

You may recall at the start of the series that lots of viewers picked up on the fact that even though Theresa and Fraser live in a big, posh house they do not have a dishwasher.

People didn’t buy the sleekness of Helen’s school office either.

And in last night’s episode, viewers picked up on the totally unrealistic, hangar-like hospital room David stayed in.

One viewer said: “That’s a bloody massive hospital room for one patient!”

Another extrapolated and wrote: “Lol at this whole set.

“The huge empty hospital room, the spotless headmistress office with no paperwork in sight and the house which doesn’t look like it’s lived in #HollingtonDrive.”