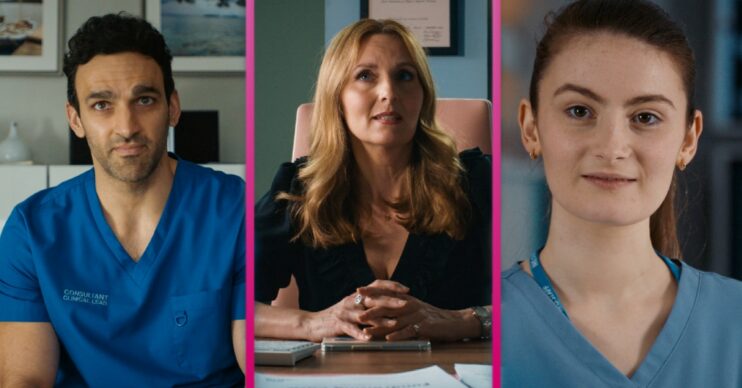 Is Fletch in trouble?

Holby City spoilers for tonight reveal Fletch reacts angrily when he finds Evie and Rich together.

Evie arrives at work following another one of Rich’s parties. She makes another attempt at questioning the nature of her relationship with Rich.

However he’s quick to dismiss her concerns and insists he’s falling in love with her.

Evie is left torn and feels guilty for coercing Mia into coming to the parties, especially when Donna reveals she hasn’t left her room in days.

After trying to get advice from Jeni, Evie walks into a scary situation in the basement with Fletch.

When the violent encounter brings her closer to her dad, she’s tempted to tell him what’s been going on.

However Fletch ends up making his own discovery.

After spotting an intimate moment between Rich and Evie, Fletch quickly intervenes, remind Rich that Evie is only 17.

He ends up violently punching him to the ground. Instantly Rich begins to have a fit.

With Rich’s life now on the line following his brain injury, Fletch is left panic-stricken about the consequences he could face if Rich doesn’t pull through.

Jeni tells Evie that she will cover for Fletch if she promises not to tell him what’s been going on with Rich.

Read more: Strictly Come Dancing cast: Why did Nina Wadia leave EastEnders? Would she ever go back?

Dom is desperate to slow down Carole’s dementia and gets on board with Darwin’s stent trial.

However it becomes clear the procedure is riskier than they are letting on, a distressed Carole finally breaks down and tells Jac she doesn’t know if she wants to be part of the trial at all.

Kylie tries to remain professional as her old frenemy Mel integrates herself into the AAU.

The two begin to pull together to make a teen patient’s prom dream come true and Kylie wonders if she has got Mel wrong.

However a later discovery quickly dispels Kylie’s thoughts and it’s not long before the two are sworn enemies again.

When Eli insists that Cameron is the perfect candidate, Chloe has to decide what to do next.

She insists she can’t move forward on a project that involves Cameron. Chloe makes the decision to quit.