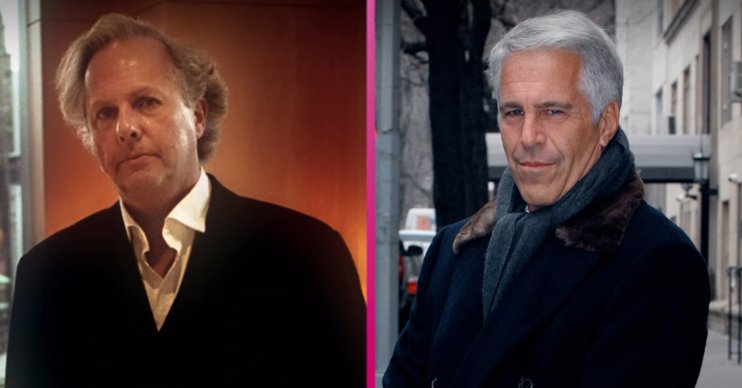 Although the 70-year-old former Vanity Fair Editor-in-Chief doesn’t give an interview, his former employee Vicky Ward does.

She makes several claims about her ex boss and accuses him of stopping her from exposing Epstein in a feature she penned back in 2003.

But who is Graydon Carter and what exactly are the allegations made against him?

Who is Graydon Carter?

During his time heading up the publication’s coverage, he won 14 National Magazine Awards.

He also has a place in the Magazine Editor’s Hall of Fame.

Graydon penned the 2004 book What We’ve Lost and has also worked on several documentaries, including the 2010 film Public Speaking, which was directed by Martin Scorsese.

Today, he is the co-owner of two restaurants in Manhattan, New York – the Waverly Inn and the Monkey Bar.

Graydon has been married three times and has five children.

He currently lives in France with his wife of 15 years, Anna Scott.

What are the allegations against Graydon Carter?

While investigating the financier, a contact put her in touch with sisters Annie and Maria Farmer, who claimed they were sexually abused by Epstein.

In the Jeffrey Epstein Netflix documentary, Vicky says that the siblings were prepared to go on the record.

But as she started writing the piece, the pregnant journalist allegedly started receiving threats from Epstein.

She claims the billionaire warned her not to publish the sister’s claims.

“I then got a phone call from Graydon and he was pretty spooked,” she says in the Netflix documentary.

“He’d found a severed cat head in his garden. He also found a bullet on his doorstep.

“Then suddenly, I was told by my editor that the girls were big taken out of the story. I was horrified. They’d been so brave and laid so much on the line.

“And the message came back, ‘Well he’s obviously sensitive about the girls’. That’s a sore point. I’ll near forget [Grayson] saying to me ‘I believe Jeffrey Epstein’.”

What has Graydon Carter said about the claims?

Graydon issued a statement to Netflix after being made aware of the allegations.

It read: “Ms Ward’s reporting on this aspect of her story came in as we were going to press and simply did not meet our legal threshold.”

He then reportedly issued a second statement which read: “During my 25 years at Vanity Fair, we were steadfast in our legal review on every story.

“Ms Ward’s reporting on this aspect of her story came in as we were going to press and simply did not meet our legal threshold.

“Furthermore, her recounting of the facts around the Epstein article is completely inaccurate.

“If we had had three people on the record willing to stand up for us in court if Epstein had chosen to sue, we would have run it.”

Has Graydon Carter said anything else?

Vicky first made allegations against Gradyon in 2015 when she penned an article for the Daily Beast titled, I Tried to Warn You About Sleazy Billionaire Jeffrey Epstein in 2003.

Graydon was quizzed about the claims during an interview with New York Times Magazine last year.

When asked if he had any regrets, he said: “I kick myself over missing multiple stories. The fact is, that story was the toughest story done on him, probably over a 10-year period. He hated the story.”

He added: “All I can say is that the practices that we practiced back then were practiced pretty much across the entire legitimate magazine industry.”