Good Morning Britain is getting an evening spin-off.

The live late-night version of the ITV breakfast show will be broadcast after an England World Cup match. 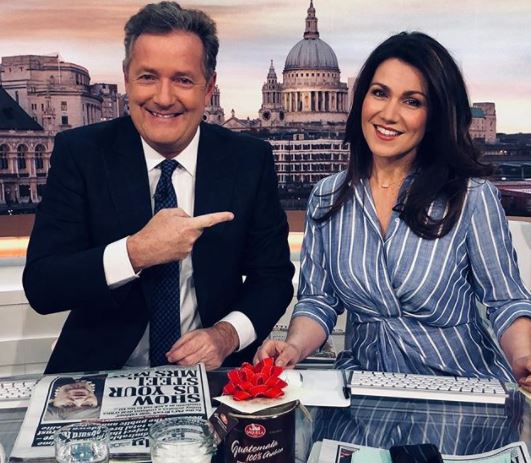 Piers and Susanna are heading for primetime! (Credit: Instagram @piesmorgan)

The one-hour, peak-time ITV show will feature debate, chat and famous faces, and measure "the thoughts of the nation" after England take on Belgium, as well as other news and showbiz stories from the day.

You know you think you've had enough of me in the mornings?

Piers told Good Morning Britain viewers: "You know you think you've had enough of me in the mornings?

"Good news Britain, you're going to get a load of me in the evenings because we are having our first ever Good Evening Britain.

Piers hinted nothing was off limits as GEB will air after the watershed! (Credit: ITV)

"We are coming to primetime. We're actually very excited about it. I won't have to go to bed for that until about mid-afternoon."

Confirming the news on Twitter, Piers also pointed out Good Evening Britain will be airing after the watershed, hinting viewers may see more risqué material than usual! 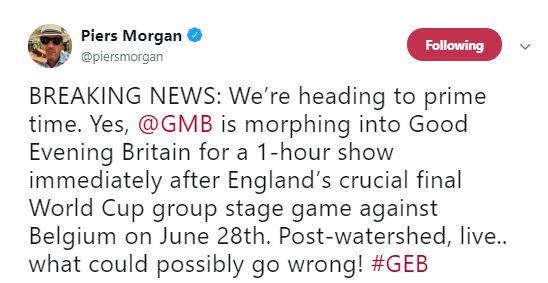 Susanna, meanwhile, pointed out the show will have stiff competition against Love Island, which airs on ITV2 at 9pm and just smashed the channel's ratings records with its series four premiere.

Say hello to Good Evening Britain with @PiersMorgan and @SusannaReid100.

Emma Gormley, managing director of ITV Studios's daytime team, said: "We are excited to introduce one of our flagship shows to the evening schedule. It promises to be a lively 60-minute event, filled with all of the ingredients that make GMB so unmissable!"

Naturally, there was a mixed response on Twitter, with some people thrilled at the prospect of more Piers, and others less excited!

One fan tweeted: "Unleashed after the watershed?? I'll even leave #loveisland for that! #Bringiton."

Another agreed: "That's fantastic!! love you two on TV, its pure comedy."

But another social media viewer remarked: "If Piers is on it then I won’t bother tuning in! Thanks anyway!!"

Good Evening Britain will air on Thursday June 28 at 9.15pm on ITV.