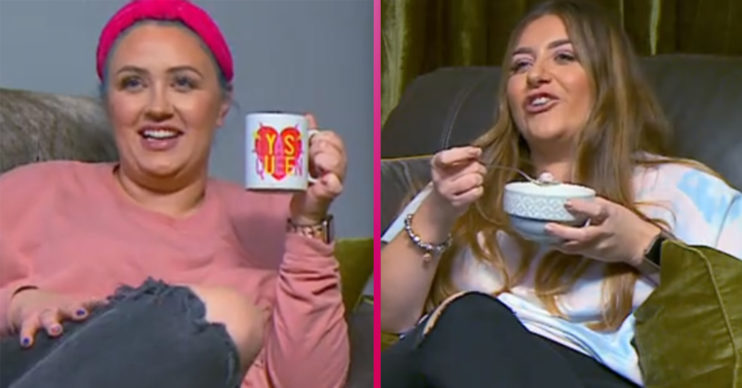 Gogglebox viewers have taken issue with Ellie and Izzi over their confessions once again.

This time, it was an honest chat about not only their bathroom habits, but also their boyfriends, that had Channel 4 viewers sharing their views.

The usual TV conversation took a very different turn, and viewers were not pleased.

Gogglebox viewers were not pleased with the discussion

Ellie kicked off the conversation and said: “I don’t get the fear of pooing at work, I just bum pad it and flush straight away.”

Izzi joined in with her confession: “If I do have to, to the point where I’m touching cloth…”

“Because even when I go at home, I have to tell Gram, ‘Don’t come within six feet of the toilet door’, I go in, lock the door and I put my music on.”

Ellie took it one step further with her confession: “I poo with the toilet door open, I’ll have a conversation with Nat.”

The bathroom confessions didn’t stop here though. Ellie continued her story: “I was so buzzing last night because me and Nat were laid down watching telly and he was falling asleep – and he farted loudly twice.

“I was like, ‘Oh my god have you just trumped!’

“He didn’t reply, so I was guess he was asleep, but I was absolutely thrilled. And then he woke up and before we went to bed he went for a poo.”

Taking to social media, Gogglebox viewers did not hold back.

I’m *sure* we were all gagging to know all the details of Ellie and Izzy’s defecatory routine. 🤢 #gogglebox

Thanks Ellie and izzi now I know too much about you’re personal doings I.e poo and you’re boyfriend poo’s .. to much information #Gogglebox

Viewers even wondered if Ellie and Izzi’s partners would be glad they were being so open and honest. One viewer tweeted: “Bet Nat’s so happy Ellie has just told the nation about his pooping and farting”.

This isn’t the first time Ellie and Izzi have stirred up viewers. Last week they revealed they love nothing more than a cup of tea when they eat fish and chips, and a huge debate broke out.

Whilst some viewers agreed with the girls, many were horrified at their guilty pleasure.